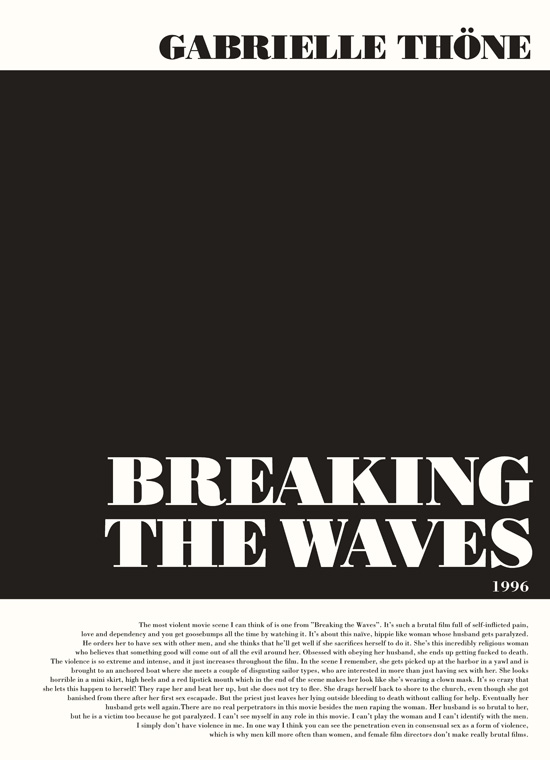 The most violent movie scene I can think of is one from ”Breaking the Waves”. It’s such a brutal film full of self-inflicted pain, love and dependency and you get goosebumps all the time by watching it. It’s about this naïve, hippie like woman whose husband gets paralyzed. He orders her to have sex with other men, and she thinks that he’ll get well if she sacrifices herself to do it. She’s this incredibly religious woman who believes that something good will come out of all the evil around her. Obsessed with obeying her husband, she ends up getting fucked to death. The violence is so extreme and intense, and it just increases throughout the film. In the scene I remember, she gets picked up at the harbor in a yawl and is brought to an anchored boat where she meets a couple of disgusting sailor types, who are interested in more than just having sex with her. She looks horrible in a mini skirt, high heels and a red lipstick mouth which in the end of the scene makes her look like she’s wearing a clown mask. It’s so crazy that she lets this happen to herself! They rape her and beat her up, but she does not try to flee. She drags herself back to shore to the church, even though she got banished from there after her first sex escapade. But the priest just leaves her lying outside bleeding to death without calling for help. Eventually her husband gets well again.There are no real perpetrators in this movie besides the men raping the woman. Her husband is so brutal to her, but he is a victim too because he got paralyzed. I can’t see myself in any role in this movie. I can’t play the woman and I can’t identify with the men. I simply don’t have violence in me. In one way I think you can see the penetration even in consensual sex as a form of violence, which is why men kill more often than women, and female film directors don’t make really brutal films.

What’s the most violent filmscene that you remember having watched?

One film comes to my mind, Breaking the Waves. That’s a very brutal film and you have goosbumps all the time. Unfortunately I just no longer remember the ending. I know that she dies. How she is killed by the village people or how…Her husband orders her to have sex with other men and in the end she is fucked to death. It’s such a brutal film. Yeah right, now I remember, she is brought to a boat and is raped and dies in the end from her wounds. She is brought to a bigger ship with a yawl and there are these disgusting guys, who eventually are not only interested in having sex with her. It escalates and they humiliate her as well. And she is so obsessed about obeying her husband. She thinks that he will get well if she sacrifices herself. That’s extremely violent. This self-inflicted pain, love, dependency, pain…The development of the violence is so intense, it just increases throughout the film.

Do you remember if the scene took place in daytime or nighttime?

How many men were there?

I think two or three, not so many.

How did they and she look?

If you had to embody one of the characters, victim or perpetrator, in this scene which would you choose?

Well I cannot identify with the men, because I don’t have violence in me and also because I am a woman. And because women are anyways from start already victims because of their gender. I don’t know how she get’s in contact with these men, I only know that she is picked up at the harbor in a yawl and is brought to this boat anchored but also I remember that she does not try to flee. That’s so crazy that she lets this happen to herself. But her husband eventually gets well again.

Do you remember how she dies? Does one see what the men do to her?

I think both rape and beating is happening. But she does not die on the boat. She drags herself to shore again to the church and the priest throws her out of church or leaves her bleeding to death and does not call for help. Already after the first sex escapade she is banished from the church. She is an incredible religious person. That’s why she does it. Through her faith. Because she believes in Good. That from all the evil something Good will come.

Is this type of self-inflicted pain something female you think?

Yes. But that can be explained by the fact that men and women love differently. They have different “households of emotions.”

Do you think that women love more than men?

Well definitely differently. Men are more on the optical and are more sexually oriented. Most imaginations that men have are not like “flower sex”, it’s more full on, in the mind too. With women, well of course there are always exceptions but with women in general love is less through optical attraction. I cannot insert myself into this female character, but I have understood her person. They are both unfortunately not beautiful people, that’s actually good. But that’s why you as a viewer think if you would do something like that for this idiot. And her husband is so brutal to her, being paralysed and all. In principal we women are the humble ones. And if you really push it to the top: Consensual sex is also a form of violence. This penetration is a form of violence. That’s why I think that is why men kill more often than women. It’s connected with our primal genes.