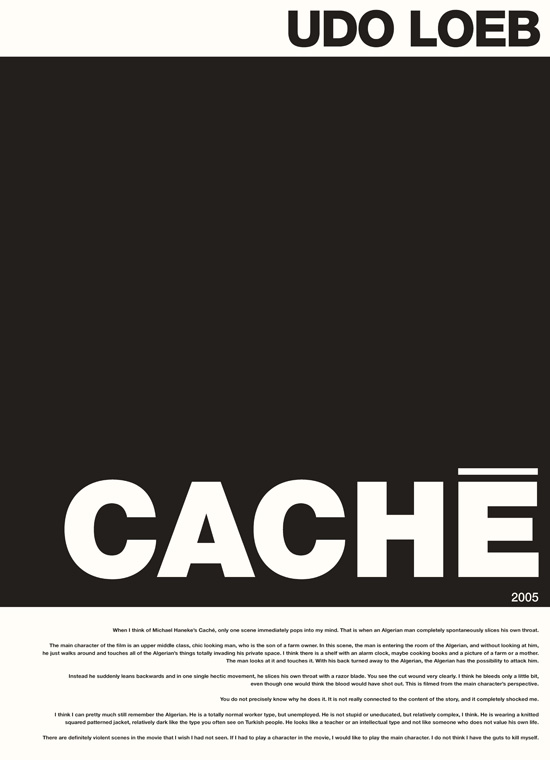 When I think of Michael Haneke’s Caché, only one scene immediately pops into my mind. That is when an Algerian man completely spontaneously slices his own throat.

The main character of the film is an upper middle class, chic looking man, who is the son of a farm owner. In this scene, the man is entering the room of the Algerian, and without looking at him, he just walks around and touches all of the Algerian’s things totally invading his private space. I think there is a shelf with an alarm clock, maybe cooking books and a picture of a farm or a mother. The man looks at it and touches it. With his back turned away to the Algerian, the Algerian has the possibility to attack him.

Instead he suddenly leans backwards and in one single hectic movement, he slices his own throat with a razor blade. You see the cut wound very clearly. I think he bleeds only a little bit, even though one would think the blood would have shot out. This is filmed from the main character’s perspective.

You do not precisely know why he does it. It is not really connected to the content of the story, and it completely shocked me.

I think I can pretty much still remember the Algerian. He is a totally normal worker type, but unemployed. He is not stupid or uneducated, but relatively complex, I think. He is wearing a knitted squared patterned jacket, relatively dark like the type you often see on Turkish people. He looks like a teacher or an intellectual type and not like someone who does not value his own life.

There are definitely violent scenes in the movie that I wish I had not seen. If I had to play a character in the movie, I would like to play the main character. I do not think I have the guts to kill myself.

…It does make sense emotionally. In the moment when I’m watching it, I think, yes, that really is the only thing possible, the only way out. But I can’t explain why…

The point is that he has to kill himself in order to become active, someone who takes action. This explanation only works if he’s not the blackmailer, otherwise that would have been taking action. Anyway his suicide makes him into a perpetrator. I mean, he could have killed the others.

If he was the blackmailer, he was also the rapist. I remember that I suddenly felt sorry for him when he killed himself. The main character, on the other hand, I thought was malicious.

The scene about killing the chickens is important. The main character kills a chicken as a child and blames it on the Algerian boy. Maybe that’s why his parents get fired, although they didn’t do anything. That’s why the main character is already evil, on the other hand he’s also a father who gets threatened.

Yes, this is the pivotal point of the movie. The killing of the chicken changes the whole life of the Algerian. The main character doesn’t understand this.

Right, that’s what it’s about. Cause and effect. Someone kills themselves, does something totally extreme, in other words, and the question is how it got to this. The question is this: Is a small kid guilty when it kills a chicken? It looks more like fun. And yet it still develops into a huge problem for the Algerian. The role guilt plays in all of this is never made totally clear, but in the end something terrible happens. Maybe that’s something inherent in the human psyche, that there is no cause.

This is something Haneke does so well. He knows that violence sometimes has no cause and that’s it’s irrational.

And yet it’s inescapable. It’s not even structural, as in Hannah Arendt’s “Banality of Evil”, and it’s not anchored in structures or in the system. With Haneke, you can’t go from people to make conclusions about the system, the violence here has its roots somewhere else entirely. People are not really evil, but the blame cannot be found in the system either. You have to look for guilt on an irrational level, perhaps in the images, in the world as Haneke shows it.

Have you seen the documentation of the Eichmann trial?

In the filmed documentation Eichmann always tells the court that he’s not to blame, that he was only following orders. I wonder if this is comparable to your scene?

There’s a major difference to Haneke. And that also goes for the Nazis who were tried at Nuremberg: They had an ideology, a belief, an idea to fall back on. It’s different with Haneke. His people are lonely, they have no ideology, no big ideas, or religion, which they can believe in. There’s just people and something in the images. And that’s what’s so crazy about it.

It also makes it difficult to talk about violence when it’s so individual and not objective. How can you talk about it then?

Exactly, if we can’t talk about it, we can’t really judge it. But we can talk about the film, about the images, as we are doing now.

Have you read Thilo Sarrazin’s book “Germany is doing away with itself”? In it he says that Turks don’t want to…

He says that the Turks cannot be integrated or that they don’t want to be. And he says another thing that’s a lot more extreme. He says that the Turks are all stupid and that’s why the overall population is getting more and more stupid, because the stupid people are having more and more kids. That’s how I understood it. Sarrazin’s main thesis is that Arabs and Turks cannot be integrated, because they are different from the French, the English, the Japanese, and people from other nations. These people have all integrated wonderfully, it’s just the Arabs and the Turks who can’t integrate, on the basis of their culture. And the second thesis is that they are all stupid and they are reproducing like rabbits. This is why the overall intelligence in Germany is getting lower. Of course it’s complete nonsense.

Once I got properly involved in the 1st May (demo) and I got scared when the cobblestones started flying over my head and I had teargas in my eyes, and so I had to run away and I had no idea where to … It was pretty cool but very stressful at the same time.

Do you think that there’s too much violence in Germany and in Berlin?

Good question. I think that in Germany, violence is always closely linked with repression. Or the other way round: Berlin is relatively rough, and you could say that everything here is totally violent because it’s so dirty and ugly and there’s so much concrete. But if you go to other cities, where it’s cleaner and more beautiful, it’s still violent because the people there are so hostile in everything they do. Uptight, small-minded. It’s like when you go through a clean, orderly street in a village or small town, and you feel like puking all the time because of you feel that the people there are constantly telling you how to behave, it feels so repressed, it has nothing to do with values … It’s totally interesting to think about this in terms of violence, maybe it’s something else.

I think Germany definitely allows fewer freedoms than other countries when it comes to one’s attitude to life. You get the feeling here that you have to vindicate yourself all the time. That certainly creates pressure. In this respect Germany is definitely a good breeding ground for violence, yes.

Merkel recently said that Germany is going through a very violent phase, what do you think?

Maybe you should talk to the people who work at the job center and who have to deal everyday with people who don’t have any money left. Or the bureaucrats who ruin people’s lives. I don’t want to malign them, often it’s not their fault …

Haneke is continuously refining his language. In “Benny’s Video” or “Funny Games” his working method is easy enough to spot. In “Funny Games”, for example, when the actor looks directly into the camera, at the viewer, and says: Do you want to see more? That’s the Haneke moment. He tries to involve the viewer, turn us into victims, into perpetrators. He confuses us, we don’t know who’s side to take …

You said that the image does something with us. So there’s also something violent about watching a movie?

Exactly. And if we make wrong decisions, we become violent ourselves. For example, if we say that we don’t want to have to take a stance … Then you become guilty in a way and the film can be really painful. That’s the images again.

Maybe that’s why a lot of people don’t watch violent movies. I can understand it. I personally watch a lot of horror movies, because I like talking about them. I look at the special effects, the language, how they do it.

I very rarely watch stuff like that. “Saw” for example, I wanted to watch it, and on my own, but I couldn’t watch it to the end. I don’t know what it was anymore exactly, but I had to turn it off.

Violence that you don’t see, I find much more extreme. When someone dies and the camera shows a sandwich, like in “Funny Games” …

And now to the other question. In the scene in “Caché” with the Algerian and the main character, the father. If you had to play one of the two characters, which would it be?

The father, I guess. I’d find it difficult to imagine the energy that would be necessary to kill myself.