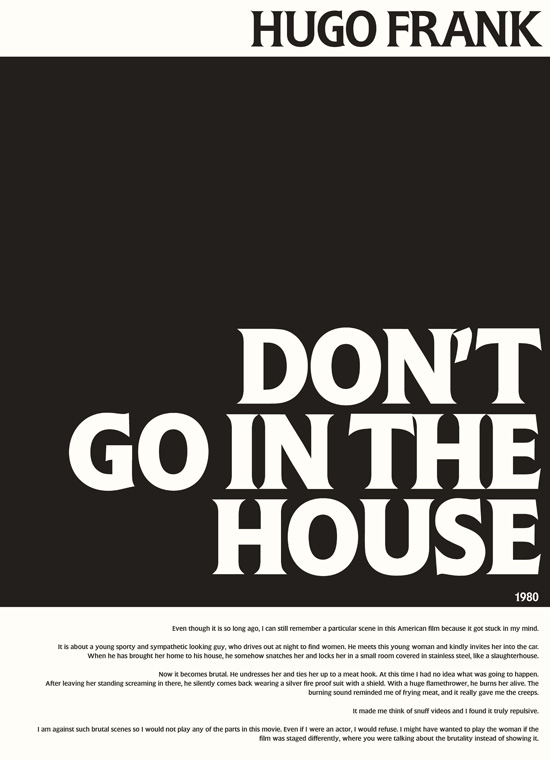 Don’t Go in the House

Even though it is so long ago, I can still remember a particular scene in this American film because it got stuck in my mind. It is about a young sporty and sympathetic looking guy, who drives out at night to find women. He meets this young woman and kindly invites her into the car. When he has brought her home to his house, he somehow snatches her and locks her in a small room covered in stainless steel, like a slaughterhouse. Now it becomes brutal. He undresses her and ties her up to a meat hook. At this time I had no idea what was going to happen. After leaving her standing screaming in there, he silently comes back wearing a silver fire proof suit with a shield. With a huge flamethrower, he burns her alive. The burning sound reminded me of frying meat, and it really gave me the creeps. It made me think of snuff videos and I found it truly repulsive. I am against such brutal scenes so I would not play any of the parts in this movie. Even if I were an actor, I would refuse. I might have wanted to play the woman if the film was staged differently, where you were talking about the brutality instead of showing it.

So you try to protect yourself?

I don’t do online banking, I don’t disclose my personal data, no photos, no chatting. I have too much respect for these data miners. If the data was erased quickly I’d do it, but not like this. There are people who can’t help doing this kind of crap, they put all their energy into it. They’re incredibly creative and could really do something with their lives if they’d just turn their minds to it. It’s a shame, wasted time. This is why I refuse to get involved, ordering things with bank account details and stuff, or photos. They can try as hard as they like, but they won’t find anything on me. By not going on the Internet, how else, I’m a scaredy-cat in this respect. It destroys everything that the Internet should really be about.

Do you think violent movies have a negative influence on people?

I’m no expert, but it must vary from case to case, on the person, what their social background is, how mature they are, and whether they are introduced to these things with caution. With the kind of people who sit around playing violent computer games and watching brutal films all day, the boundaries start to blur. They think this is real life. I think this can have negative consequences, there are plenty of examples where this is the case. Crime thrillers, whether movies or books, that’s another kind of violence, those are okay to watch. But even there you have to remember that it’s just the movies, and that the people who get shot in them are going to get up again and act in the next movie. My parents always explained this to me, and it was true, I’d always see them again in the next movie. There’s always violence in crime movies but depending on how they are made, there’s always some entertainment value, and so that makes is justifiable, I’d say. The crime itself is not glorified, and that’s the critical difference. But when you see the murder in every last detail, this crosses a boundary and it becomes unwatchable.

If you had to be involved in this scene, which role would you play, the man or the woman?

Difficult to say. I don’t think I’d want to play either of them. I wouldn’t want to be involved in this film as an actor. I’m against seeing such brutality.

But if you had to decide, would you rather be the woman?

Hypothetically, yes, okay. If you could show it differently, like in “Tatort”, where they only talk about it, how she gets burned. You hear this sort of thing often enough in real life, about someone getting abused. But scenes like that should really be censored. Of course you’ll always get people who want to see hardcore crime movies. But a scene like this should be toned down, in case someone with enough criminal or sadistic energy tries to reenact it.

The film “Muttertag” is such a pale imitation of what just happened in real life in Norway.

A documentary maybe. I, for one, would like some information about how this Breivik came up with his perverse idea in the first place. Or how it was possible that he could get hold of a police uniform. Did he get it from a costume rental or what? There was nothing about this in the media.

I read that he spent ten years preparing…

Aha. If anything about it interests me, then it’s the impulses behind it, I mean the whole story. Did he play brutal video games as a kid, or what went on there.

I think he grew up in a family that treated him violently. And he was not mentally healthy. But how he got from that to this extreme act, nobody knows…

How twisted can you be? But we we’ll never know because we don’t have a screw loose like that. These people are not right in the head, whatever the reason. The interesting thing, with Breivik too, is if they were born like that or whether they got like this due to external circumstances, because they were beaten as kids or whatever. How did it happen? This is what needs researching. So that you can stop the mistakes earlier on in similar situations.

Do you think we can pinpoint the origins of violence in ourselves? They’ve scanned the brains of criminals. To try to show where the violence starts. But it was impossible, way too complex. Maybe we’ll never know how to avoid violence, maybe violence will always exist.

It’s a mixture of nature and culture. Our culture makes it possible that we can try to talk about it and argue about it. On the other hand, violence is in our nature.

Of course humans have enormous potential for brutality and evil. The question is just, what are the mechanisms that set these things in motion? It’s in both of us too. But we were both born with laughs, I don’t know what you’re going to do in the future, an inhibition threshold, which we’re not going to cross. Even if you really hate someone, you’re not going to get brutal and take a gun and shoot their brains out. You don’t have this option. This is the inhibition threshold.

I wouldn’t be able to live with myself either.

Exactly. Even if it happened accidentally, in a car crash or something. I don’t think I could ever get over it … People who are hungry for power do have this option though, I’d say. Take Syria, or the things emperors and kings got up to in the past to keep a hold of power or increase their wealth, or to conquer land. In cases like that something must have happened to break the inhibition threshold. I always wonder what they were doing it for, were they having gold poured over themselves or what? But the bottom line is they got nothing out of it. Ok, so they might have influenced history. But in the end it’s all pointless. Syria, for example, what does Assad think he’s doing, shooting his own people? When he dies, it’s not as if he can take his country with him.

There’s something old-fashioned about this type of visible violence, don’t you think? The idea that other people will quake in their shoes at a show of power.

HF: When I think about the medieval documentaries that I watch on TV, you see that the rulers basically ruled through violence, through murder and violence. Luckily those times are over.

So violence has changed?

That’s right. Today we have it in brutal movies, that’s the substitute for things that people maybe used to live out. In the old days people would murder their subjects if they were in the position to do so, and today maybe they watch these kind of movies instead.

It touches something in us.

Normal people like us also find it fascinating sometimes, when someone else does it, kills people, even if we wouldn’t do it ourselves. Not just the images, but the gruesome fact. That’s why these crime movies are so popular.