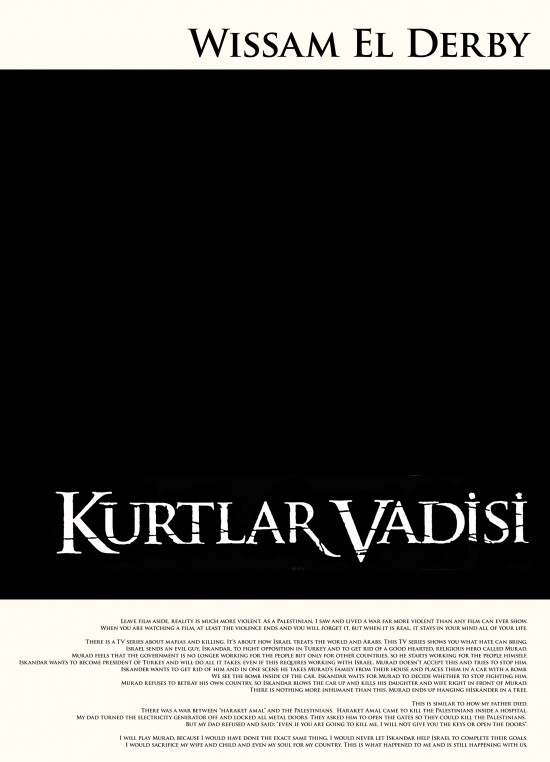 Leave film aside, reality is much more violent. As a Palestinian, I saw and lived a war far more violent than any film can ever show. When you are watching a film, at least the violence ends and you will forget it, but when it is real, it stays in your mind all of your life.

There is a TV series about mafias and killing. It’s about how Israel treats the world and Arabs. This TV series shows you what hate can bring. Israel sends an evil guy, Iskandar, to fight opposition in Turkey and to get rid of a good hearted, religious hero called Murad.

Iskander wants to get rid of him and in one scene he takes Murad’s family from their house and places them in a car with a bomb. We see the bomb inside of the car. Iskandar waits for Murad to decide whether to stop fighting him. Murad refuses to betray his own country, so Iskandar blows the car up and kills his daughter and wife right in front of Murad. There is nothing more inhumane than this. Murad ends up hanging hIskander in a tree.

This is similar to how my father died. There was a war between “haraket amal” and the Palestinians.  Haraket Amal came to kill the Palestinians inside a hospital. My dad turned the electricity generator off and locked all metal doors. They asked him to open the gates so they could kill the Palestinians. But my dad refused and said: “even if you are going to kill me, I will not give you the keys or open the doors”.

I will play Murad, because I would have done the exact same thing. I would never let Iskandar help Israel to complete their goals. I would sacrifice my wife and child and even my soul for my country. This is what happened to me and is still happening with us.