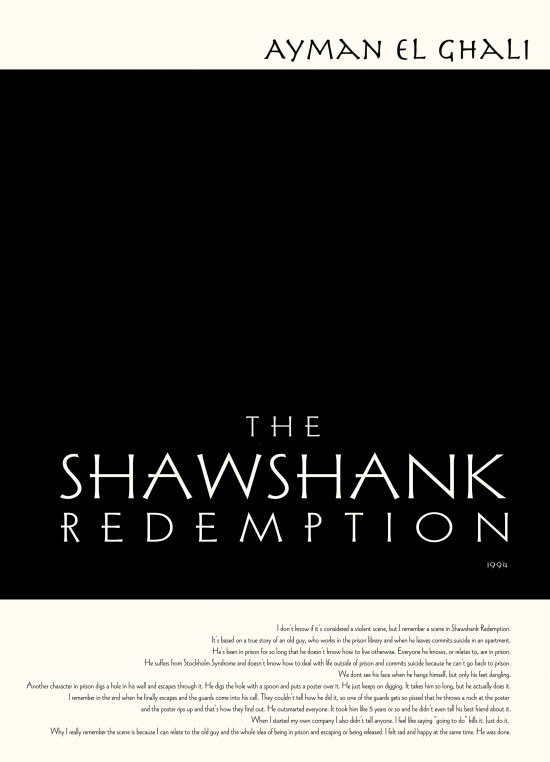 I don’t know if it’s considered a violent scene, but I remember a scene in Shawshank Redemption. It’s based on a true story of an old guy, who works in the prison library and when he leaves commits suicide in an apartment.

He’s been in prison for so long that he doesn’t know how to live otherwise. Everyone he knows, or relates to, are in prison. He suffers from Stockholm Syndrome and doesn’t know how to deal with life outside of prison and commits suicide because he can’t go back to prison. We dont see his face when he hangs himself, but only his feet dangling.

Another character in prison digs a hole in his wall and escapes through it. He digs the hole with a spoon and puts a poster over it. He just keeps on digging. It takes him so long, but he actually does it. I remember in the end when he finally escapes and the guards come into his cell. They couldn’t tell how he did it, so one of the guards gets so pissed that he throws a rock at the poster and the poster rips up and that’s how they find out. He outsmarted everyone. It took him like 5 years or so and he didn’t even tell his best friend about it.

When I started my own company I also didn’t tell anyone. I feel like saying “going to do” kills it. Just do it.

Why I really remember the scene is because I can relate to the old guy and the whole idea of being in prison and escaping or being released. I felt sad and happy at the same time. He was done.