The project unfolds through workshops that use the method ‘Direct Approach’ and focuses on the participants’ own memories and descriptions of violence scenes from films they have seen and in the end of the workshop choose how to stage.

The type of violence discussed depends on who is invited to attend the workshop and their film choices or you can decide to select a film scene and violence aspect that you wish to address to a certain group.

The workshop can be done in schools, institutions, companies, with mixed groups or groups who normally do not talk together, such as police and activists. Or keep the focus on people who have or will have authority to exercise violence such as young people in military service or police school students and get an understanding of what they are thinking and how they perceive violence.

In a Direct Approach workshop, participants go through surprising developments and experience a constant alternation and confrontation between own ideas and society’s conventions. Sometimes there is a need for subsequent conversations if they are surprised or shocked by their own statements. 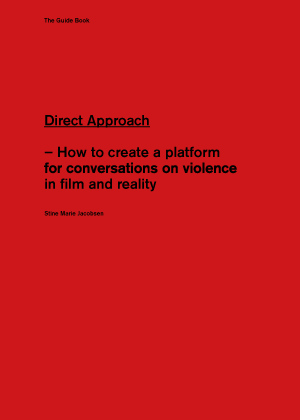 Schools and institutions who want to use the Direct Approach method, can send an email to:
contact@direct-approach.org and get a free pdf of the book. Please add name of school or institution in the email.

Guidelines
How to structure the workshop.
Read more

During the interview the participants can also expand the memory by repeating the whole course of narration backwards, telling the whole story again from the end to the beginning. By doing this you gain more details.

After the conversation focus on transcription of the interviews for the violent statement texts and extract the film poster text.

In the end of a workshop you can make a video.

Film poster and violent statements
How the film posters and texts are made.
Read more

The structure of the film poster text is in three parts.

1.    When, how or with whom the participant watched the film scene.

2.    The description of the film scene with most important details

If you want to do both the violent statement texts and also film poster texts you need to transcribe the whole recorded interview. If you just do the film poster you can save time and just take out the sentences that refer to film scene and the afterwards take out strong and clear emotional and political statements. But remember to keep a reality show free environment, meaning, do not exhibit too private stories of the person. Remember you are looking for public statements on violence.

When you subtract either sentences for the film poster or statements on violence, you may very possible encounter repeated statements. In that situation you choose what sentence you find the strongest and clearest.

Sort all the written sentences into these two groups:

1.    Interesting sentences and sentences that contribute to the story of the film.

2.    Less interesting sentences or sentences that do not directly relate to the film.

Then order the sentences from group 1 in chronological order based on the story of the film. Change the sentences so that the spoken language resembles the written language without changing the substantive words or content.

Make sure that the narration has a good flow, so that descriptions which are too long and remembered details are cut out if they do not fit into the rest of the story or if they do not bring the story forward.

Find the original poster and then the original font by using these sites for free font downloads: dafont.com, google.com/fonts, 1001freefonts.com and myfonts.com/whatthefont/ – last one helps you find the font.

The fonts that you find on these pages are copies of the real font types, but different enough to be legal to use. When you have found the font then use it to type in the name of the participant and title of your film on the black and white template. Please write the film title in its original language.

You need Photoshop or Indesign to work on the template. You can download the poster template below.

Videos
If you decide to make a video.
Read more

This part is more physical. As the guidebook describes, you can also do this part as a role-play.

Do a casting session before rehearsing the film scene, where the participants are asked to explain their choice of character. Especially if a group of people wish to play together and not alone in the same film scene, it can be a very important moment to bring in reflection and discussion of identification and choice of roles.

Then rehearse the scene and prepare the different costumes and props.

Ask the workshop group to analyse and discuss the scene(s) and prepare a storyboard with images and descriptions of camera movements. Remember the memorised version might alter from the original and decisions have to be made how to best tailor the new videos. Any extra scenes, as in extra memories, the video should be changed accordingly. Try not to follow the original.

Find a similar location as the original for filming. Locations might result that the camera movements have to be slightly altered or mirrored. If there is time, go to the locations and test shoot on site.

In the last part of the workshop, the participants film and edit the various memorised scenes. A part of the group or all should be introduced to a film editing program, so that they can edit their own films or at least assist on the editing of the films.

You can come up with new ways to do the videos or choose to use the design of the Direct Approach videos, where the participants act alone the role of their choice.

You can also ask them to replace, remove or show the violence alternatively. Ask for example what they would replace a weapon with. The violent scene could be replaced with a text, another act, the camera could turn away and film something else and so forth. By further asking the participants to change the memorised film scene, you generate a way to process and change the violent experience.

As a next level to the step-by-step instruction in the guidebook, this can open a further discussion on violence in film and reality.

Here are a few links to free film sounds: freesound.org / videoblocks.com / freesfx.co.uk / audiomicro.com/free-sound-effects/free-foley – There might be copyright terms on some sounds.

Exercises
Additional to those in the guidebook and a list of suggested films.
Read more

Why? This exercise is about discussing differences in violent media.
How? The method is writing and discussion.
What? Discussing mediation of violence.

Divide everyone into smaller groups and ask them to write from imagination a fictional violent situation together and also select a violent film scene and a violent scene described by the news.

In this way they have three versions of three violent situations described in their own words and also depicted in film and news.

Tell the groups to choose a certain violence topic such as domestic violence, sexual harassment or racism. Or choose the same topic for all groups.

Finally this exercise ends with a discussion of which story the group finds to be most violent, whether the group thinks the fictive or real narratives are most violent.

Initiate the end discussion by using these questions:

Why? This exercise is about collective memory in storytelling.
How? The method is interview and conversation.
What? Discussing individual ideas versus collective ideas of violence.

Show all participants in an email the same film scene and tell them to describe the scene in their own words in a written reply. Tell them to reply on the same day as they watch the video. In this way you get a more immediate answer similar to the practice of an unguarded conversation.

Inform the participants that they will watch another film scene at a meeting, which will take place around 10 days after. This way they will not try to remember the film scene and a natural process of forgetting can happen. Have a deadline for their reply on one or two days after you sent the email.

Inform them you will use their written description for comparison with another film scene that they will watch later, where in actuality they will be asked to collectively describe the same scene again at the meeting.

This is very similar to the project, which is shown in the guidebook, but expands the individually remembered scene to a collectively remembered scene. When many people have to describe the same film scene an even more absurd and complex interpretation can happen.

Finally compare all the written email descriptions with (a transcription of) the collectively narrated version. Notice the differences in all the different individual versions and compare them to the collective version. Initiate the end discussion by using these questions:

Why do you think some things change?
What is left out and why?
Are there new details, which were not there before?
Where do you think these details come from?
What influences you to remember in a particular way?
Are you influenced by other films? Stories? Reality?

Why? This exercise is about finding the detailed differences in real and remembered film violence.
How? The method is writing, imagery and discussion.
What? How is remembered violence different?

Show everyone the same film scene and discuss the memorised version vs. the original. You can do this part also like THE EMAIL exercise.

How is the remembered version different from the original? Find out what the differences are.

These differences can for example be that one remembers the murder weapon wrong or that the perpetrator after killing someone does something else, which is not in the original. Visualise the differences in either a drawing or a photograph or a performance or if you are in a group, discuss the difference.

Why? This exercise is about violence and levels of efficiency in different media.
How? The method is discussion.
What? Further expanded discussion on violence film.

Lead the group from the guidebook discussions into a further discussion of whether they think everyone likes to watch violence films and if not, what makes some attracted to it and other repulsed by it?

Initiate the end discussion by using these questions:

Which media (books, movies, documentaries, the news etc.) do you think has the most realistic impression of how violence is in real life and why?
Is it bad to engage with violent media?
What positive and negative consequences can there be when watching violent films?
Can it have a cathartic function?
Are you a bad person if you like to watch violence films or is it a basic human trait to be attracted to pain, death and danger?

A list of films with violent scenes participants have remembered throughout the project. For the sake of overview they are ordered in topics:

Direct Approach was tested for the first time in cooperation with District Kunst – und Kulturförderung and in collaboration with Gangway in a 6 month workshop for young people in Berlin between 13-25 years old. The young participants are producers of interview conversations, film posters, videos and an exhibition. Their statements and developed perspectives on how identities are defined within discourses of violence are opened for a broad public reflection in an exhibition in District from July 5 to September 21, 2014. The workshop was funded by Berliner Projektfonds für Kulturelle Bildung and sponsored by Cine Plus, Filmarche and Eiszeitkino.