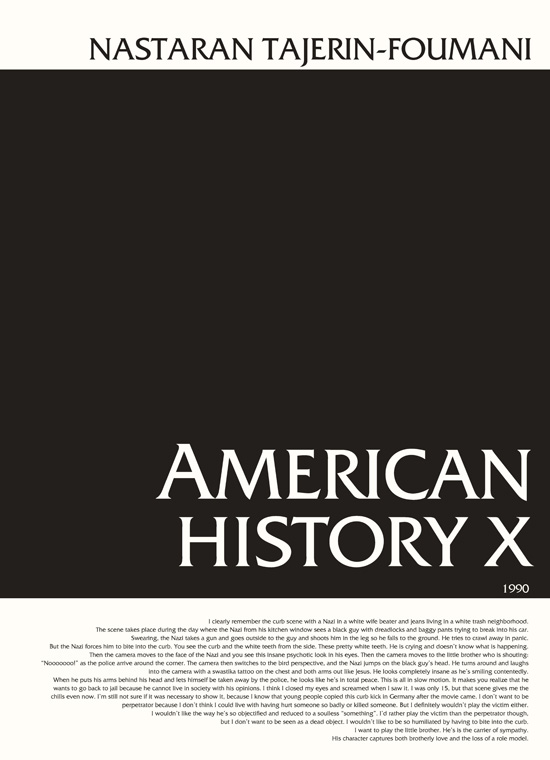 I clearly remember the curb scene with a Nazi in a white wife beater and jeans living in a white trash neighborhood. The scene takes place during the day where the Nazi from his kitchen window sees a black guy with dreadlocks and baggy pants trying to break into his car. Swearing, the Nazi takes a gun and goes outside to the guy and shoots him in the leg so he falls to the ground. He tries to crawl away in panic. But the Nazi forces him to bite into the curb. You see the curb and the white teeth from the side. These pretty white teeth. He is crying and doesn’t know what is happening. Then the camera moves to the face of the Nazi and you see this insane psychotic look in his eyes. Then the camera moves to the little brother who is shouting: “Nooooooo!” as the police arrive around the corner. The camera then switches to the bird perspective, and the Nazi jumps on the black guy’s head. He turns around and laughs into the camera with a swastika tattoo on the chest and both arms out like Jesus. He looks completely insane as he’s smiling contentedly. When he puts his arms behind his head and lets himself be taken away by the police, he looks like he’s in total peace. This is all in slow motion. It makes you realize that he wants to go back to jail because he cannot live in society with his opinions. I think I closed my eyes and screamed when I saw it. I was only 15, but that scene gives me the chills even now. I’m still not sure if it was necessary to show it, because I know that young people copied this curb kick in Germany after the movie came. I don’t want to be perpetrator because I don’t think I could live with having hurt someone so badly or killed someone. But I definitely wouldn’t play the victim either. I wouldn’t like the way he’s so objectified and reduced to a soulless “something”. I’d rather play the victim than the perpetrator though, but I don’t want to be seen as a dead object. I wouldn’t like to be so humiliated by having to bite into the curb. I want to play the little brother. He’s is the carrier of sympathy. His character captures both brotherly love and the loss of a role model.