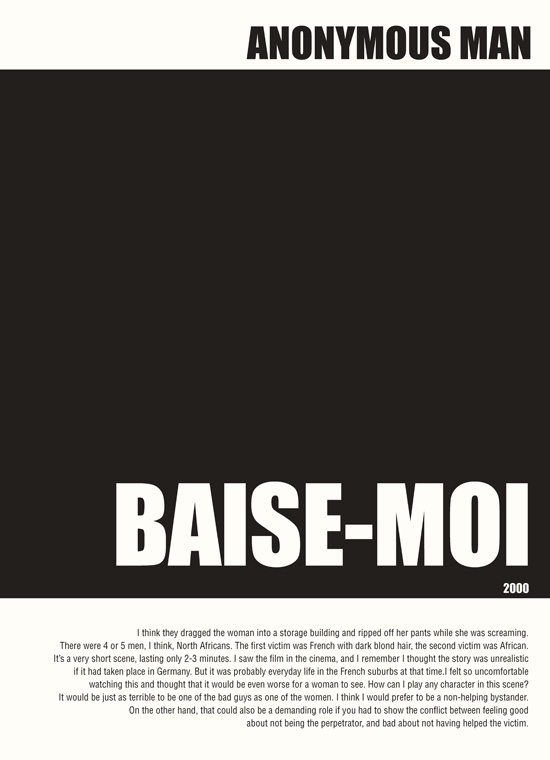 I think they dragged the woman into a storage building and ripped off her pants while she was screaming. There were 4 or 5 men, I think, North Africans. The first victim was French with dark blond hair, the second victim was African. It’s a very short scene, lasting only 2-3 minutes. I saw the film in the cinema, and I remember I thought the story was unrealistic if it had taken place in Germany. But it was probably everyday life in the French suburbs at that time.I felt so uncomfortable watching this and thought that it would be even worse for a woman to see. How can I play any character in this scene? It would be just as terrible to be one of the bad guys as one of the women. I think I would prefer to be a non-helping bystander. On the other hand, that could also be a demanding role if you had to show the conflict between feeling good about not being the perpetrator, and bad about not having helped the victim.

…“Baise-moi” or “Fuck Me”. In this film there were two scenes that really struck me. The first was a rape scene, the girl is laid out and her pants are pulled down, and the terrible thing is that you see the penis being inserted and that the woman’s vagina is dry. That was a really unbearable scene for me. In the second scene the girl allows herself to be raped, she shows no emotion, and the guy says to her: I can’t fuck this zombie, I can’t get it up. That was the most disturbing experience involving sexual violence in a movie. As far as sexual violence goes, that movie is pretty sick all round. The main and frightening thing in scenes like this is that only one person is really being active, I mean exercising violence, while the others are basically just watching.

Does that seem realistic to you?

Unrealistic for Germany, at the time the movie was made, and still today I guess. Cases like this are not common. In the banlieues in France at that time, this kind of thing was probably happening everyday. But because sexual violence gets a lot of attention here and crimes again sexual self-determination are taken very seriously, depersonalized images or rather violence like this will be very disconcerting for a young person who has grown up here.

Do the rapists in the scene say anything to the woman?

Not as far as I remember. They tear her pants, and the woman is screaming and whimpering.

Do they beat her up?

Do you remember what she was wearing?

Jeans, I think, but I can’t remember what she had on top.

What color was her hair?

What nationality were the rapists?

I think what the French call “Maghrébin”. The second victim was also “Maghrébin”, so North African descent. The first victim was French.

They take her into a garage, you said. Do you remember how long the rape scene lasts?

Did you watch the movie alone?

With my then girlfriend, at the movies.

How did your girlfriend react?

We talked about this exact scene. Of course she didn’t like it much. If a man finds it uncomfortable relating to a scene like this, it must be much worse for a woman.

(…) Violence sells and I sometimes wonder what exactly is being produced and why. Can we learn something from it, or it is just about thrills? Why do people watch violent movies?

In her book “Regarding the Pain of Others”, Susan Sontag says that the more fictional violence we are exposed to, images of war for instance, the less we can relate to actual violence and recognize it as real. I have a friend who watched her uncle commit suicide. She never watches violent movies because physical violence, blood and shooting remind her of the experience with her uncle. But I have always watched violent movies to try to find out why they make them, and why we want to watch this stuff. I wonder how the police feel about them or people who were in wars. Do the police have a different relationship to violence? Are you always able to switch off or do your experiences as a policeman merge with fictional ones?

If you do nothing but beat, shoot, and arrest people, you develop a different kind of professionalism. In war for example, they train soldiers with computer games. In Iraq the soldiers sometimes listen to music when they’re in the field, they switch off, so they’re no longer conscious of what they’re doing. With normal officers on patrol like myself, it’s different, it’s all conscious and it does prey on your mind.

Do you think there will be more physical violence in the future or it is more likely to be invisible?

I think that the level of everyday physical violence will more or less remain the same. Of course excesses occur, but generally I’d say that we could well be on the way to becoming a more communicative and less violent society. The potential is there at least, of course, that’s what humans are like. But things are not more violent now than in the past. As far as structural violence goes, I think we live in a very free world that is full of possibilities. Of course especially in our information society, there are tendencies that one might find subjectively restrictive, total availability of personal data, for example. But as far as the state monopoly on violence goes, I don’t think it’s increasing.

I read that the more a society deals with a particular phenomenon, the more the phenomenon disappears. So if like now a load of new books are coming out about violence, it means that people are turning their minds to the problem and that violence is decreasing. At the same time Angela Merkel is saying that Germany is in the midst of one of its most violent periods in a long time. That surprised me. It made me wonder why she was saying that right now.

The potential danger may be increasing, yes. But I would not say that people are actually experiencing more violence.

(…) Which character, which role would you choose to play in the rape scene in “Baise-moi” and why?

Mean question. Normally it’s quite fun to be the bad guy in the film, but in this scene you would really not want to be the bad guy. But then you wouldn’t want to be the victim either. I think I’d prefer the passive onlooker. It definitely wouldn’t feel good to play the victim. And I would not like to play the rapist, I couldn’t act the part convincingly. My personality would keep me from playing the role.

So you’d prefer to be the onlooker. Is the onlooker here more perpetrator or victim by just standing there and not intervening?

The onlooker is definitely a weak character here. The conflict, the helplessness between a brief moment of excitement and then shock at what is going on, that’s what you’d have to convey. This kind of emotional shift is very challenging for an actor.

(…) I often think the terms “victim” and “perpetrator” are problematic in everyday life. Society tends to protect the victims rather than the perpetrators. But I think that the perpetrator can also be the victim sometimes. Have you had similar experiences in your work?

It can happen. Most basic offenders, people committing felony or vandalism, are poor frustrated bastards, I feel sorry for them, so the victim role definitely fits these kind of people. But there are other areas of crime where the perpetrators are not victims, where they know exactly what they’re doing. But I rarely encounter this sort of people myself. Mostly I come up against the perpetrator-as-victim type.

In Denmark the police are bringing perpetrators and victims together. They talk under the supervision of a police officer and a psychologist.

They do that here too.

Do you think it make sense?

I’ve had no experience with it personally. My colleagues will be able to tell you more about that. I just know that it happens with young people to prepare them for when they run into each another again. Often they live very close to one another. So it’s better to clear things up, with an apology or something. But I think it’s hard for the victims to shake off the uncomfortable feeling that the perpetrators were not genuine with their apology.

Would you say that violence is existential, something that goes right back to our very origins and is therefore something that is linked to basic survival issues?

A basic instinct, yes. It’s always there, you can always make a connection between violence and someone’s life being threatened. So that means structural violence is also necessary, just like we kill animals, so human beings will always exercise violence. And there will always be someone who gets hurt.

If I interrupt you now, you could also call that violence in a way. Or if I insult you, that is verbalized violence.

Right. It happens a lot to us police, not only do we get physically attacked, but people often get violent with us, for example by repeatedly questioning our methods, constantly refusing to answer questions, or imitating or making fun of our work.