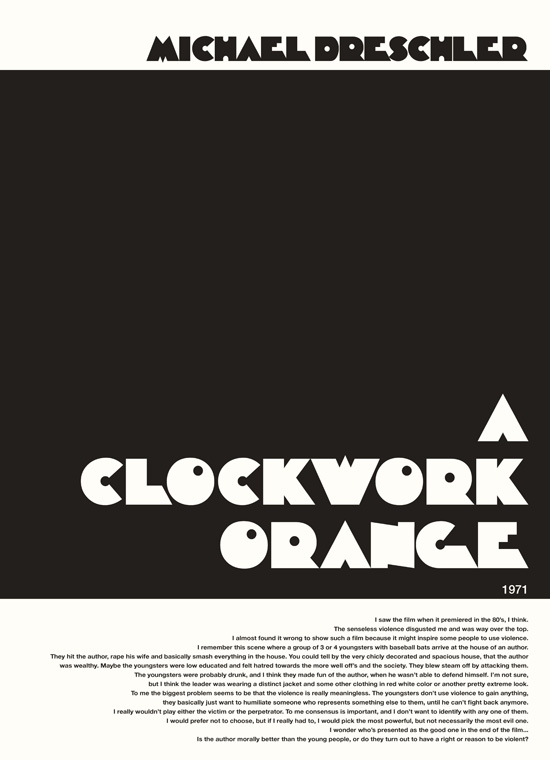 I saw the film when it premiered in the 80’s, I think. The senseless violence disgusted me and was way over the top. I almost found it wrong to show such a film because it might inspire some people to use violence. I remember this scene where a group of 3 or 4 youngsters with baseball bats arrive at the house of an author. They hit the author, rape his wife and basically smash everything in the house. You could tell by the very chicly decorated and spacious house, that the author was wealthy. Maybe the youngsters were low educated and felt hatred towards the more well off’s and the society. They blew steam off by attacking them. The youngsters were probably drunk, and I think they made fun of the author, when he wasn’t able to defend himself. I’m not sure, but I think the leader was wearing a distinct jacket and some other clothing in red white color or another pretty extreme look. To me the biggest problem seems to be that the violence is really meaningless. The youngsters don’t use violence to gain anything, they basically just want to humiliate someone who represents something else to them, until he can’t fight back anymore. I really wouldn’t play either the victim or the perpetrator. To me consensus is important, and I don’t want to identify with any one of them. I would prefer not to choose, but if I really had to, I would pick the most powerful, but not necessarily the most evil one. I wonder who’s presented as the good one in the end of the film… Is the author morally better than the young people, or do they turn out to have a right or reason to be violent?

You said that these movies can motivate people. What exactly do you mean by that?

I think that they can be inspiring or motivating in that they show scenes that can be a role model for young people in particular. Scenes which encourage them to try something out, to demonstrate their power for a change. Like in “Benny’s Video” by Michael Haneke.

Yes. There’s something fascinating about it as well, that’s for sure. And if you don’t have much chance to exercise power or dominance, at work for example, where you have to do as other people tell you, or at school etc. The film does trigger something that could influence you somehow. On the other hand it doesn’t suggest that it could be too dangerous or what it could lead to. If I remember correctly, the ringleader in the Haneke film also gets into difficulties, he is ostracised or condemned and yet I still found the other just too strong.

I don’t want to say that violence is completely senseless. Of course violence is a show of power and domination that translates into wealth. Take the mafia or the drug cartels in Mexico, who go right out and behead their enemies. They’re saying, we exercise power to secure our territory so we can continue to do business, and if you get in our way, you do so at the risk of your life. No one could say this doesn’t make sense. And then you have legitimized state violence etc. The question is always, at what point does this merge into individualistic, terrorist activity, which is just about securing interests, with no regard for casualties?

When judges have to make decisions about violent crime they have determine the motive behind it. On the one hand you can say that the youths in “Clockwork Orange” are indulging in acts of meaningless violence. On the other you can say, poor kids, they have no idea what to do with themselves, they have no future, and they are taking their revenge like this, which means their violence does have a motive.

As I see it, violence is also linked to economic, contemporary issues. This is also what’s happening in “Clockwork Orange.” Frustrated young men with no future who turn to violence. On the other side you have the state, which locks up the gang leader and tries to rehabilitate him. Using means that are extremely violent. So we have seemingly meaningless violence and we have state violence. None of this is new. Simone de Beauvoir wrote a book in which she asks why the state is allowed to kill but the individual is not. A highly topical question about justice and the law between the state and the individual. A potentially utopian question.

We are incredibly lucky that the law is binding, that we have a constitutional state and courts which dispense justice on the basis of the law. But compared with how arbitrarily the law can be applied in states like Russia or China, things are certainly better grounded here, even if the law is not always fair in individual cases. The tenancy law, for example, which discriminates against tenants, this might make you doubt the fairness of the legal system or constitutionality, because in such cases the law is often the law of those in power or those with economic power. But generally in Europe you certainly have better chances of appealing to the law than in other places.

In the scene with the baseball bats, were they holding the man, or beating him, what was going on?

Maybe they were actually holding him and really laying into him. Whatever the case, since then I can’t look a baseball bat without having those associations. It’s strange because baseball is actually a lot of fun. My great-nephew loves playing it. But there’s a lot of violence in the way the bat is used. You have to swing and hit with a lot of force. It’s easy to imagine what it would be like to be hit with such a thing.

Would you say that violence has decreased or increased in Germany?

Hard to say. I know that violence is always in the air. When I see Turkish teenagers here at Kottbusser Tor or at Hermannplatz, how they walk round with their chests all puffed up, sometimes I do get the feeling that it’s on the rise, in schools too. But it’s reported on more, in other words we know about it more. On the other hand I have to say that in the countryside where I grew up, there was also plenty of violence.

It’s also a question of whether you walk around looking provocative or not. Over time I’ve become a normal citizen. In the sixties, you really felt the aggression of older people. So it made sense to hold yourself back a bit. It never happened to me later one, it was more the other way round. In Turkey, in Egypt, in African countries people would often say: Hitler good, German good. It was like that in Kenya and Turkey.

Crazy, what’s that about?

They have a different relationship with that time and history. For them Hitler is maybe someone like Napoleon, someone who straightened things up or did some good, who showed the world what’s what.

When I think about the uproar caused by Günter Grass’s poem. When actually he was only drawing attention to a moment that needed discussing, and as such it was also important. The reaction from the Jewish and the Israeli side in particular was an overreaction, and in terms of the issues and problems, more counterproductive than anything else. Whether or not the minute details were phrased one way or the other is irrelevant.

What became of that story?

Nothing else. Grass can no longer get an entry visa. This shows how difficult relations still are. Although I think that neither the young nor older people like myself have to be embarrassed about being German anymore, permanently having to drop to their knees in cases like this.

So in this situation you’d rather be on the side of the perpetrator?

Yes, of course. It would probably be the better side in the end. Although I have no idea how things turned out, in other words, who came out on top. Does the writer have a stronger moral position, or do the kids have the right or a reason to be the way they are. It’s a difficult question.

So it’s hard to differentiate between victim and perpetrator. In real life and in fiction. And in this film as well, the roles change and you don’t really know who’s good and who’s bad, and you ask yourself whether the victim might legitimately become the perpetrator.

I believe that the person who’s violent should be punished and brought to justice. We should not always feel obliged to probe deep into the perpetrator’s psyche to find reasons to exonerate them. And the victims are then abandoned, that can happen too.

Yes. And if you say that someone like Breivik is so psychologically disturbed that he’s not responsible for what he did, and that he should spend the rest of his life in an asylum instead of getting fair punishment, I think that’s wrong and impossible to justify, also with respect to the victims. It just doesn’t stand in relation to the crime. And this applies to Breivik himself, he’d laugh his head off. In my second job as a social worker I was involved with prisons. Naturally everyone there was innocent. There were some nice guys there, whether you believe it or not. In my opinion you have to work out a relationship which takes into account certain developmental factors, and which places the crime in relation to the victims, and includes appropriate consequences for the perpetrator. Otherwise the injustice only increases.

Does that mean Brevik should die rather than be locked up for life?

He should get the punishment that stands in relation to his responsibility. He wouldn’t want it any other way himself. Which means he’s not a lunatic or whatever, and as I see it, he also wouldn’t want to be seen as a hero or a martyr. If someone is really psychologically damaged then obviously it’s a bit different. There’ll be situations which a person cannot be held responsible for. But I don’t think this is the case with Breivik. He gave reasons for what he did which can be seen as rational.

He wrote a long statement which I have not read and have no intention of reading. But from what was in the news, I more or less understand what he was thinking.

It’s an eclectic world view that unites everything that suits him, and all points to what he sees as the enemy. The judges will not be able to get around the fact that Breivik is not crazy. His background and worldview is more like that of suicide bomber. It’s linked to hopelessness but the causes are very much rooted in society. The conclusions he draws from them are another matter though, it’s difficult.

I still think it’s important that as a society we talk about violence and avoid making over-hasty judgements. Of course “violence” is a big word with many different meanings and categories. We have being trying to work out the difference between state violence and individual violence, but what does that mean do you think?

I think that the increasing push to self-centeredness means that the connection to and the responsibility for the community is becoming increasingly fractured. The obligatory subordination in the past or in authoritarian societies today that used to lead to or still leads to people’s suffering, no longer exists in our society. This has resulted in disorientation, dissatisfaction and a lack of a foothold in society, and there is desire to get organized and change things whether this is in religions communities or Nazi organizations. People who are able to deal with this lack of security, they are pretty much off the hook.