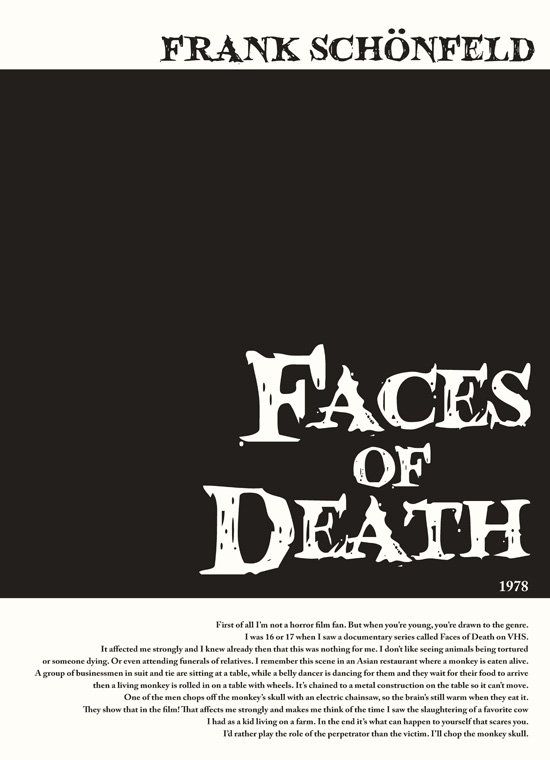 First of all I’m not a horror lm fan. But when you’re young, you’re drawn to the genre. I was 16 or 17 when I saw a documentary series called Faces of Death on VHS. It aected me strongly and I knew already then that this was nothing for me. I don’t like seeing animals being tortured or someone dying. Or even attending funerals of relatives. I remember this scene in an Asian restaurant where a monkey is eaten alive. A group of businessmen in suit and tie are sitting at a table, while a belly dancer is dancing for them and they wait for their food to arrive then a living monkey is rolled in on a table with wheels. It’s chained to a metal construction on the table so it can’t move. One of the men chops o the monkey’s skull with an electric chainsaw, so the brain’s still warm when they eat it. ey show that in the lm! at aects me strongly and makes me think of the time I saw the slaughtering of a favorite cow I had as a kid living on a farm. In the end it’s what can happen to yourself that scares you. I’d rather play the role of the perpetrator than the victim. I’ll chop the monkey skull.

Yes cause it cannot defend itself. Absolute helplessness. I was maybe 4 or 5 at the time with the cow incident. And I find it horrible that a thing like this exists. That which is shocking is also sometimes dissuasive. So I also find it important, that for example with war movies, Platoon or alike, movies where violence is not glorified but that show me how war is like. How bad it is. What suffering. Or for my sake also bull fights, where animals are slaughtered. To me that’s dissuasive and maybe also for many others. So that you get another relationship to it. That you are made aware how animals are being tortured. I like being shocked, only shock moves me to have another relation. Pictures that shock are in the end always imprinted.

How is the difference between professional and private life? Is there a difference in your attitude towards violence or does this mix together?

Well on job…wait a minute I have to think…privately I deal with it differently. Professionally on job I am always relatively correct and try to boil things down. Privately it is a pretty much a good protection that I am so big. I respect everyone around me and don’t go in their way. But when I feel that someone is not going out of my way, it can sometimes be hard to keep the emotions in control. But I learnt that earlier in young age it was more intense. But sometimes in traffic if someone is drives insanely and is a danger to others, I prefer not to be a cop privately, but sometimes I have the need to address someone at the traffic lights. But then I don’t do that often. So sometimes I am caught in a, not hunting instinct, more a “that cannot be true”. And if I am in the area and that happens I cannot accept it. I want people in certain behavior to moderate themselves.

So you have contact to many young people. Do they watch violence movies and how does that affect them? Does it make them more violent as a lot of people say?

Just a short intermezzo. My children once brought a video game home where you had to kill zombies. And I played it and noticed how you can insert yourself, not that it was fun, but I could defend myself and noticed how that led to trivialize violence. And now back to television, where hundreds of violent acts are shown every day. We no longer grant these real. Tom and Jerry are also totally violent. I do think we trivialize violence. It does impact young people who look at violence several hours per day. You consume and you don’t perceive it as real, that it is violence at all. Today through the internet one gets easy access to it. Who regularly consumes violence will at some point become numb. So when I feel lonely or have any pubescent problems, then it can have the effect that it enhances the potential to commit violence. So for example in the direction of a gunman, these people are always on the side, quiet, reserved, maybe just one friend, they were not in life, no other interest than in shooting games or such thing. Then I am of the opinion that it can lead to that you relive your own violence und want to reconstruct that. But the young person who has a normal social life can look at a horror movie without turning into a serial killer.

Yes and here only pure violence helps. I once had a case, we had a 911 caller…someone called and said, “I have been murdered”. We went there and rang the doorbell. Nobody opens. We knock but nothing happens. The moment we were about to kick the door in, it opens…and there is a tattooed guy, bigger than me and shouts, “what do you want?!”. First of all I go backwards and suddenly a colleague says, “arrest him immediately!” We all jump on him and first did not know why, but the colleague must have seen something. The colleague could look diagonally into the apartment and saw a human with a complete bloody head lying there. Behind the door he had a knife ready, so he could have stabbed me easily. They had been drinking and ending fighting and he apparently stabbed him with a knife. He put out cigarettes on him, he had burn marks and he shot him in the head with a gun. The gun was still lying next to him. He tormented him, sliced him up and so forth. Really tortured him and then went to get beer. And in the time that he went to get beer, the buddy barely made it to the phone and called us. He survived. The shot somehow got stuck in the bone. Such things are burnt in my mind. That movie live and that’s why I don’t have to look at violence movies.

When violence has a reason then we understand it, was this display of power or what would you say?

You don’t know how the perpetrator has lived as a child. I think it comes from the childhood, meaning if you constantly are beaten by a drunk dad, then you also might at some point become violent. Who got love as a child does not become like this. I think they sometimes don’t reflect, it’s a human short circuiting. It comes to this surviving, you switch off and rather the others than you. You no longer reflect, because you fear for your life. You are no longer capable of feeling guilt. For example, after just having graduated, May 1978 was my first operation and it was hell, it was like civil war here…I had fear, my colleagues also. All over we had hurt people and all over stones were being thrown. Then you only act from survivalism and sometimes in selfdefense you overstep. You are so afraid, well I don’t want to justify myself…

…A German person is not allowed to be proud of being German. Turkey is for example different. If you read Turkish newspapers is says, “Turkey for the Turkish people”. If I were to say ”Germany for the Germans” I would then I am immediately nationalistic, in the rightwing sense. We have a problem with the past and still have many years to come where we have to be careful. There are many people who misuse their power, in politics, in the police, in certain institutions and they have no social competence. I despise these people. Those who misuse power and become sheriffs and above the law. The problem is that we attack rights and there already the violence begins. This is where we enforce the will of the state, the law and that doesn’t suit the other so well and then violence is potential. And that is why we have year long training.

Is Germany becoming more or less violent would you say?

Those who exert violence have become more reckless. That means earlier when someone was beaten up, then case closed. Today when he is still on the floor there is further kicking. So you don’t any more have empathy for the other. It does increase I think. These extreme attacks. How you also see it public in the online video, from some subways or busses. It is of course also documented more today – with film. It is a huge difference, than if the lawyer has a file on the table where this act of violence is written, beautifully clarified theoretically. Then the emotions are equal zero. But if you show a video or pictures then it causes something in people.