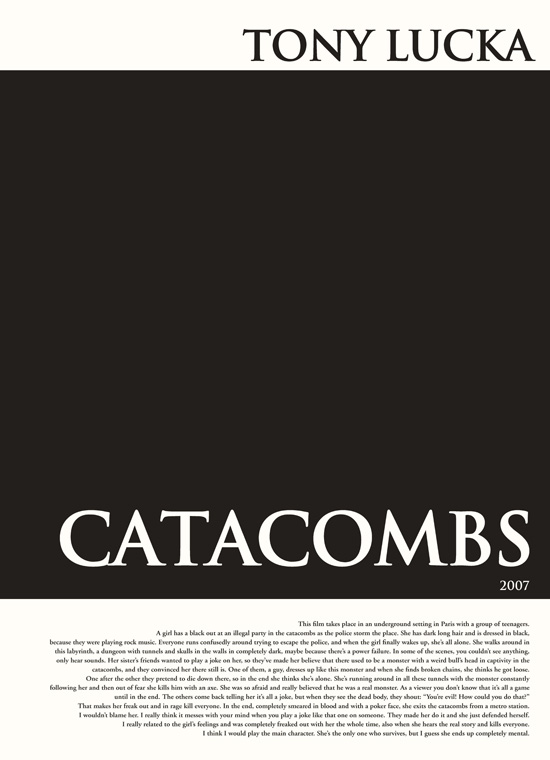 This film takes place in an underground setting in Paris with a group of teenagers. A girl has a black out at an illegal party in the catacombs as the police storm the place. She has dark long hair and is dressed in black, because they were playing rock music. Everyone runs confusedly around trying to escape the police, and when the girl finally wakes up, she’s all alone. She walks around in this labyrinth, a dungeon with tunnels and skulls in the walls in completely dark, maybe because there’s a power failure. In some of the scenes, you couldn’t see anything, only hear sounds. Her sister’s friends wanted to play a joke on her, so they’ve made her believe that there used to be a monster with a weird bull’s head in captivity in the catacombs, and they convinced her there still is. One of them, a guy, dresses up like this monster and when she finds broken chains, she thinks he got loose. One after the other they pretend to die down there, so in the end she thinks she’s alone. She’s running around in all these tunnels with the monster constantly following her and then out of fear she kills him with an axe. She was so afraid and really believed that he was a real monster. As a viewer you don’t know that it’s all a game until in the end. The others come back telling her it’s all a joke, but when they see the dead body, they shout: “You’re evil! How could you do that?” That makes her freak out and in rage kill everyone. In the end, completely smeared in blood and with a poker face, she exits the catacombs from a metro station. I wouldn’t blame her. I really think it messes with your mind when you play a joke like that one on someone. They made her do it and she just defended herself. I really related to the girl’s feelings and was completely freaked out with her the whole time, also when she hears the real story and kills everyone. I think I would play the main character. She’s the only one who survives, but I guess she ends up completely mental.