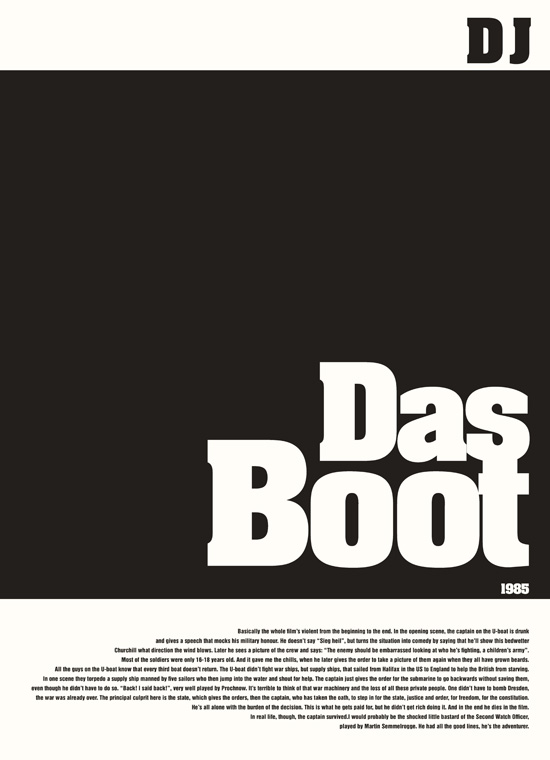 Basically the whole film’s violent from the beginning to the end. In the opening scene, the captain on the U-boat is drunk and gives a speech that mocks his military honour. He doesn’t say “Sieg heil”, but turns the situation into comedy by saying that he’ll show this bedwetter Churchill what direction the wind blows. Later he sees a picture of the crew and says: “The enemy should be embarrassed looking at who he’s fighting, a children’s army”. Most of the soldiers were only 16-18 years old. And it gave me the chills, when he later gives the order to take a picture of them again when they all have grown beards. All the guys on the U-boat know that every third boat doesn’t return. The U-boat didn’t fight war ships, but supply ships, that sailed from Halifax in the US to England to help the British from starving. In one scene they torpedo a supply ship manned by five sailors who then jump into the water and shout for help. The captain just gives the order for the submarine to go backwards without saving them, even though he didn’t have to do so. “Back! I said back!”, very well played by Prochnow. It’s terrible to think of that war machinery and the loss of all these private people. One didn’t have to bomb Dresden, the war was already over. The principal culprit here is the state, which gives the orders, then the captain, who has taken the oath, to step in for the state, justice and order, for freedom, for the constitution. He’s all alone with the burden of the decision. This is what he gets paid for, but he didn’t get rich doing it. And in the end he dies in the film. In real life, though, the captain survived.I would probably be the shocked little bastard of the Second Watch Officer, played by Martin Semmelrogge. He had all the good lines, he’s the adventurer.