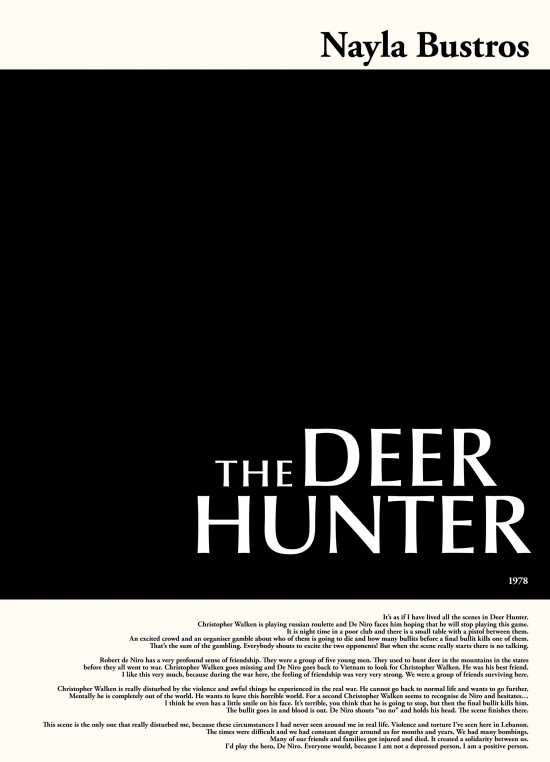 It’s as if I have lived all the scenes in Deer Hunter.

Christopher Walken is playing russian roulette and De Niro faces him hoping that he will stop playing this game. It is night time in a poor club and there is a small table with a pistol between them.

An excited crowd and an organiser gamble about who of them is going to die and how many bullits before a final bullit kills one of them. That’s the sum of the gambling. Everybody shouts to excite the two opponents! But when the scene really starts there is no talking.

Robert de Niro has a very profound sense of friendship. They were a group of five young men. They used to hunt deer in the mountains in the states before they all went to war. Christopher Walken goes missing and De Niro goes back to Vietnam to look for Christopher Walken. He was his best friend.

I like this very much, because during the war here, the feeling of friendship was very very strong. We were a group of friends surviving here.

Christopher Walken is really disturbed by the violence and awful things he experienced in the real war. He cannot go back to normal life and wants to go further. Mentally he is completely out of the world. He wants to leave this horrible world. For a second Christopher Walken seems to recognise de Niro and hesitates…I think he even has a little smile on his face. It’s terrible, you think that he is going to stop, but then the final bullit kills him. The bullit goes in and blood is out. De Niro shouts “no no” and holds his head. The scene finishes there.

This scene is the only one that really disturbed me, because these circumstances I had never seen around me in real life. Violence and torture I’ve seen here in Lebanon. The times were difficult and we had constant danger around us for months and years. We had many bombings.

Many of our friends and families got injured and died. It created a solidarity between us.

I’d play the hero, De Niro. Everyone would, because I am not a depressed person, I am a positive person.