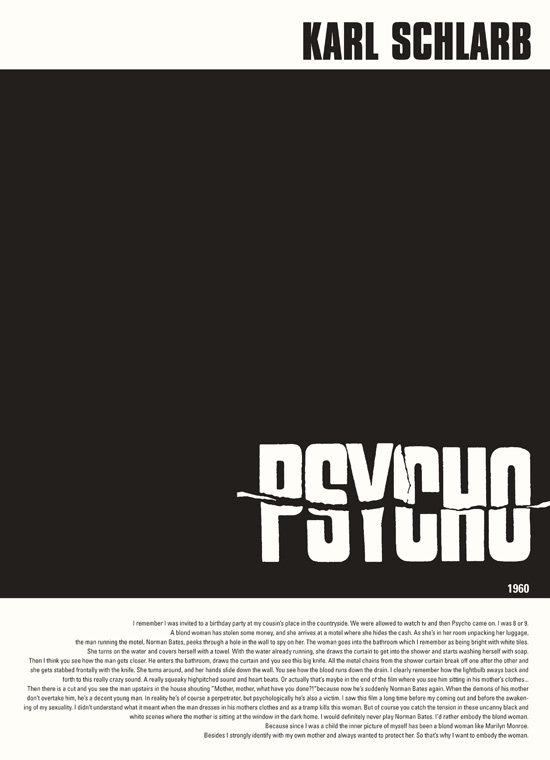 I remember I was invited to a birthday party at my cousin’s place in the countryside. We were allowed to watch tv and then Psycho came on. I was 8 or 9. A blond woman has stolen some money, and she arrives at a motel where she hides the cash. As she’s in her room unpacking her luggage, the man running the motel, Norman Bates, peeks through a hole in the wall to spy on her. The woman goes into the bathroom which I remember as being bright with white tiles. She turns on the water and covers herself with a towel. With the water already running, she draws the curtain to get into the shower and starts washing herself with soap. Then I think you see how the man gets closer. He enters the bathroom, draws the curtain and you see this big knife. All the metal chains from the shower curtain break off one after the other and she gets stabbed frontally with the knife. She turns around, and her hands slide down the wall. You see how the blood runs down the drain. I clearly remember how the lightbulb sways back and forth to this really crazy sound. A really squeaky highpitched sound and heart beats. Or actually that’s maybe in the end of the film where you see him sitting in his mother’s clothes… Then there is a cut and you see the man upstairs in the house shouting ”Mother, mother, what have you done?!” because now he’s suddenly Norman Bates again. When the demons of his mother don’t overtake him, he’s a decent young man. In reality he’s of course a perpetrator, but psychologically he’s also a victim. I saw this film a long time before my coming out and before the awakening of my sexuality. I didn’t understand what it meant when the man dresses in his mothers clothes and as a tramp kills this woman. But of course you catch the tension in these uncanny black and white scenes where the mother is sitting at the window in the dark home. I would definitely never play Norman Bates. I’d rather embody the blond woman. Because since I was a child the inner picture of myself has been a blond woman like Marilyn Monroe. Besides I strongly identify with my own mother and always wanted to protect her. So that’s why I want to embody the woman.

…I’m gay and also had problems with my identity because I thought I was a woman and not a man. Sometimes I would go fishing with my father and we had to go to the forest and I would then always wish that I would find a hand or a leg, so that I would be on TV. The fishing and the plucking of flowers was of no interest for me at all.

Would you define Bates as a perpetrator?

Well this end scene with the fly on the hand, where he says ”You see that he could not hurt a fly”. Norman Bates without his demons is a decent young man, but when these demons, the mother, attacks him…in real he is a perpetrator but psychologically he is a victim of his mother fixation. Bates is in this scene a perpetrator and the woman is a victim. But I also find it interesting how it is subliminally implied that in these bourgeois times, where one could say it happens to her rightfully, somehow karmic, that this is what happens when you steal money…but then when this car scene comes, when it wont sink, you know that there were many other women and they probably not all criminal offenders. I find that very smart that you are seduced like that. This woman or this hatred towards women, the blond woman who is showering there, this bitchy character, she took money so somehow it happens to her rightfully – Hitchcock plays with that…that this woman is somehow devalued, because she was somehow criminel, so its made easy for you to be on the side of the perpetrator, but then when you realize that there where so many women there is an enhancement from that moment on. I find that interesting how Hitchcock in that way shows two criminel energies. And he’s also a victim of his time, this male/female image – somehow this father morther honoring was back then a bit more square, the role of the secretary of the boss or the sister who also can’t believe it and who travels after her to try to solve it all.

How does the woman look?

She was blond.  I think you see her with wet hair and that she had a short hair cut styled slightly inwards, not like Tippi Hedren’s high hair style.

If you were to embody one of these characters, would you then rather play the man or the woman? Victim or perpetrator and why?

Well I see myself all the time as this blond woman. Also in Polanski’s The Tenant I would play the main character, as a transvestite. I would never consider to play Norman Bates, I’d rather play the blond woman.

Could you explain me why?

Well because I as a child had this wish to become famous and I also perceived myself as a woman, meaning my inner image of myself was as a woman. And I was of course a big Monroe fan and have an inner image of myself blond as Monroe or Tippi Hedren. Because as a child I was in a replacing role to my mother. Well my father wasn’t brutal or violent but when he did get aggressive, one is always on the side of the mother and wants to protect her. I have a strong identification with my mother. Still today. She says I am like her from character. Even though my mother has pitch black hair my inner image is a blond woman.

But here the mother or the idea of the mother is again the control. I find us talking about a form of mental control. What kind of violence do you know from your own life?

I was never taunted because of my sexuality. But under the surface there was always this collective fear of the hetero world, that somehow the hetero world presupposes their habits and you as a gay man don’t fit in. In primary school there were a few sayings, but I never really took that so seriously. I also did not really know what gay was, I was so naive that I hadn’t really realised that. They somehow knew that Karl was different and I always stood with the girls, since kindergarten, when boy girl group dynamics happened I was always with the girls somehow subconsciously. I was always in the radius of the women and never the men. There are these defaults of the society externally how one can be or not be, but there is also this inner image, in my case this Marilyn Monroe or an etheric blond woman, I selected that. That is again from outside filmic presets. Already from childhood I did not want to measure forces…in my female anti-violence mind I don’t want to measure any forces.