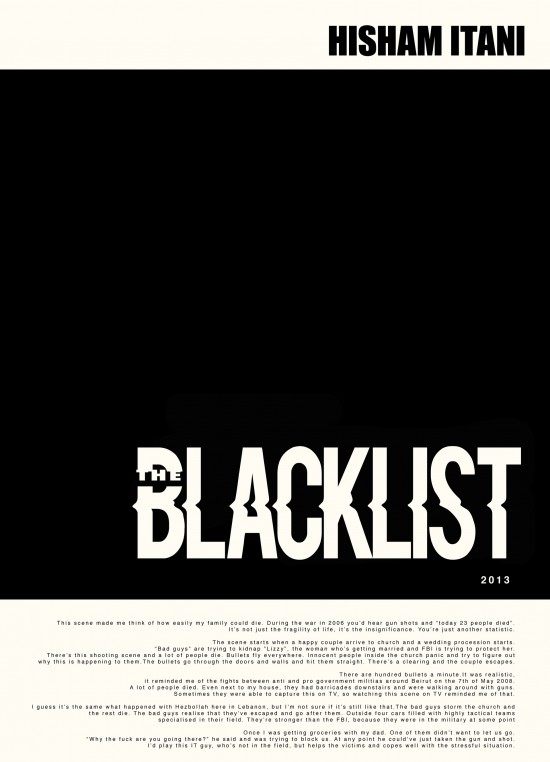 This scene made me think of how easily my family could die. During the war in 2006 you’d hear gun shots and “today 23 people died”. It’s not just the fragility of life, it’s the insignificance. You’re just another statistic.

The scene starts when a happy couple arrive to church and a wedding procession starts. “Bad guys” are trying to kidnap ”Lizzy”, the woman who’s getting married and FBI is trying to protect her.

There’s this shooting scene and a lot of people die. Bullets fly everywhere. Innocent people inside the church panic and try to figure out why this is happening to them.The bullets go through the doors and walls and hit them straight. There’s a clearing and the couple escapes.

There are hundred bullets a minute. It was realistic, it reminded me of the fights between anti and pro government militias around Beirut on the 7th of May 2008. A lot of people died. Even next to my house, they had barricades downstairs and were walking around with guns. Sometimes they were able to capture this on TV, so watching this scene on TV reminded me of that.

I guess it’s the same what happened with Hezbollah here in Lebanon, but I’m not sure if it’s still like that.The bad guys storm the church and the rest die. The bad guys realise that they’ve escaped and go after them. Outside four cars filled with highly tactical teams specialised in their field. They’re stronger than the FBI, because they were in the military at some point.

Once I was getting groceries with my dad. One of them didn’t want to let us go. “Why the fuck are you going there?” he said and was trying to block us. At any point he could’ve just taken the gun and shot.

I’d play this IT guy, who’s not in the field, but helps the victims and copes well with the stressful situation.