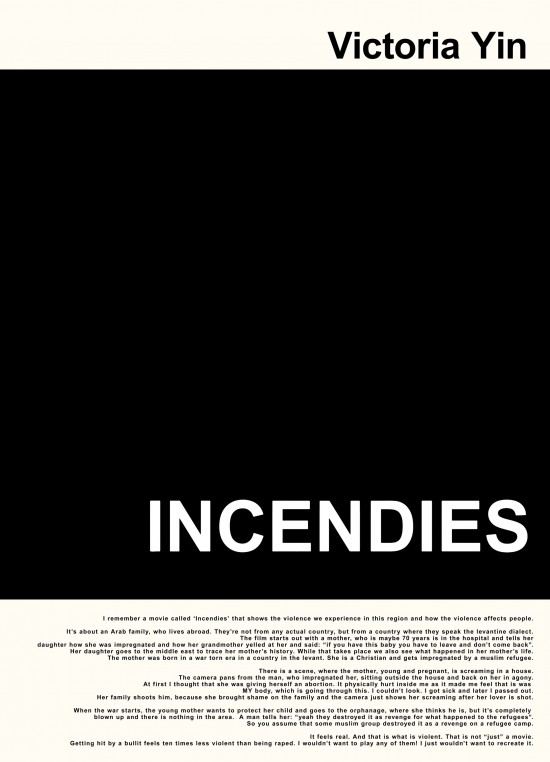 I remember a movie called ‘Incendies’ that shows the violence we experience in this region and how the violence affects common people.

It’s about an arab family, who lives abroad. They’re not from any actual country, but from a country where they speak the levantine dialect. The film starts out with a mother, who is maybe 70 years is in the hospital and tells her daughter how she was impregnated and how her grandmother yelled at her and said: “if you have this baby you have to leave and don’t come back”.

Her daughter goes to the middle east to trace her mother’s history. While that takes place we also see what happened in her mother’s life. The mother was born in a war torn era in a country in the levant. She is a Christian and gets impregnated by a muslim refugee.

There is a scene, where the mother, young and pregnant, is screaming in a house. The camera pans from the man, who impregnated her, sitting outside the house and back on her in agony.

At first I thought that she was giving herself an abortion. It physically hurt inside me as it made me feel that is was MY body, which is going through this. I couldn’t look. I got sick and later I passed out.

Her family shoots him, because she brought shame on the family and the camera just shows her screaming after her lover is shot.

When the war starts, the young mother wants to protect her child and goes to the orphanage, where she thinks he is, but it’s completely blown up and there is nothing in the area.  A man tells her: “yeah they destroyed it as revenge for what happened to the refugees”. So you assume that some muslim group destroyed it as a revenge on a refugee camp.

It feels real. And that is what is violent. That is not “just” a movie. Getting hit by a bullit feels ten times less violent than being raped. I wouldn’t want to play any of them! I just wouldn’t want to recreate it.