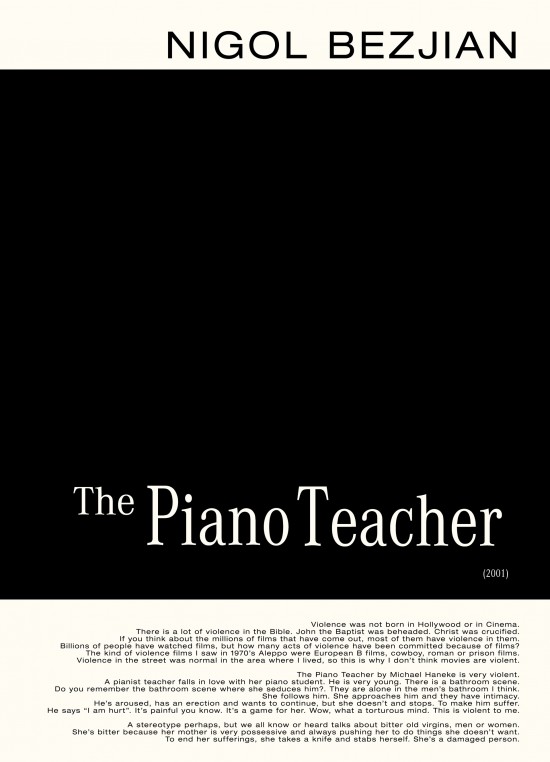 Violence was not born in Hollywood or in Cinema.

There is a lot of violence in the Bible. John the Baptist was beheaded. Christ was crucified. If you think about the millions of films that have come out, most of them have violence in them. Billions of people have watched films, but how many acts of violence have been committed because of films?

The kind of violence films I saw in 1970’s Aleppo were European B films, cowboy, roman or prison films. Violence in the street was normal in the area where I lived, so this is why I don’t think movies are violent.

The Piano Teacher by Michael Haneke is very violent. A pianist teacher falls in love with her piano student. He is very young. There is a bathroom scene. Do you remember the bathroom scene where she seduces him?. They are alone in the men’s bathroom I think.

She follows him. She approaches him and they have intimacy. He’s aroused, has an erection and wants to continue, but she doesn’t and stops. To make him suffer. He says “I am hurt”. It’s painful you know. It’s a game for her. Wow, what a torturous mind. This is violent to me.

A stereotype perhaps, but we all know or heard talks about bitter old virgins, men or women. She’s bitter because her mother is very possessive and always pushing her to do things she doesn’t want.

To end her sufferings, she takes a knife and stabs herself. She’s a damaged person.