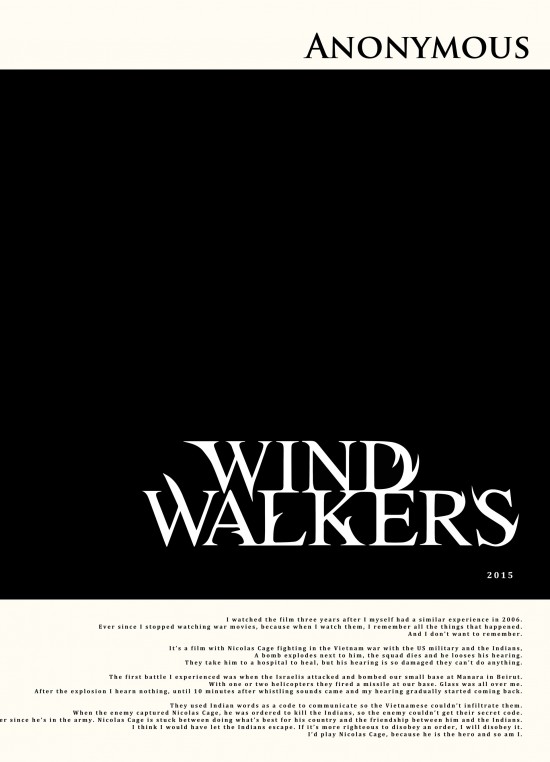 I watched the film three years after I myself had a similar experience in 2006.

Ever since I stopped watching war movies, because when I watch them, I remember all the things that happened. And I don’t want to remember.

It’s a film with Nicolas Cage fighting in the Vietnam war with the US military and the Indians, A bomb explodes next to him, the squad dies and he looses his hearing. They take him to a hospital to heal, but his hearing is so damaged they can’t do anything.

The first battle I experienced was when the Israelis attacked and bombed our small base at Manara in Beirut. With one or two helicopters they fired a missile at our base. Glass was all over me. After the explosion I hearn nothing, until 10 minutes after whistling sounds came and my hearing gradually started coming back.

They used Indian words as a code to communicate so the Vietnamese couldn’t infiltrate them. When the enemy captured Nicolas Cage, he was ordered to kill the Indians, so the enemy couldn’t get their secret code. But he sacrifices himself, because he cannot refuse a direct order since he’s in the army. Nicolas Cage is stuck between doing what’s best for his country and the friendship between him and the Indians.

I think I would have let the Indians escape. If it’s more righteous to disobey an order, I will disobey it. I’d play Nicolas Cage, because he is the hero and so am I.