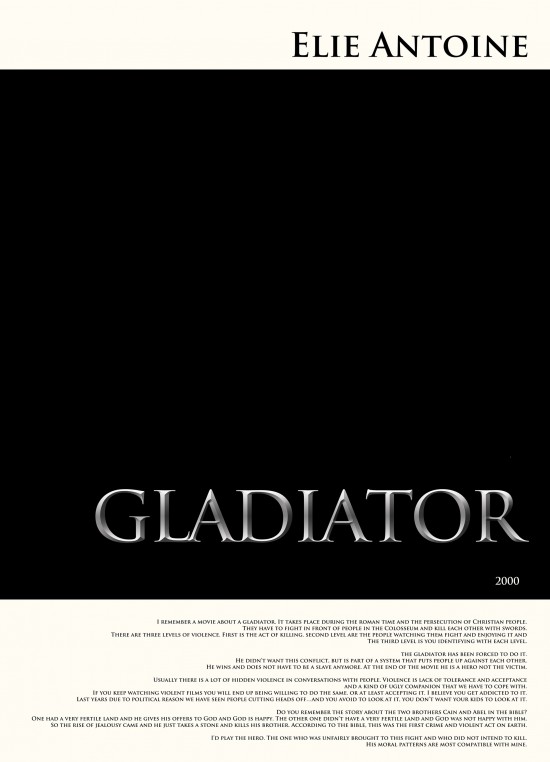 I remember a movie about a gladiator. It takes place during the roman time and the persecution of Christian people. They have to fight in front of people in the Colosseum and kill each other with swords.

There are three levels of violence. First is the act of killing. second level are the people watching them fight and enjoying it and the third level is you identifying with each level.

The gladiator has been forced to do it. He didn’t want this conflict, but is part of a system that puts people up against each other. He wins and does not have to be a slave anymore. At the end of the movie he is a hero not the victim.

Usually there is a lot of hidden violence in conversations with people. Violence is lack of tolerance and acceptance and a kind of ugly companion that we have to cope with. If you keep watching violent films you will end up being willing to do the same. or at least accepting it. I believe you get addicted to it.

Last years due to political reason we have seen people cutting heads off…and you avoid to look at it, you don’t want your kids to look at it.

Do you remember the story about the two brothers Cain and Abel in the bible? One had a very fertile land and he gives his offers to God and God is happy. The other one didn’t have a very fertile land and God was not happy with him. So the rise of jealousy came and he just takes a stone and kills his brother. According to the bible, this was the first crime and violent act on earth.

I’d play the hero. The one who was unfairly brought to this fight and who did not intend to kill. His moral patterns are most compatible with mine.