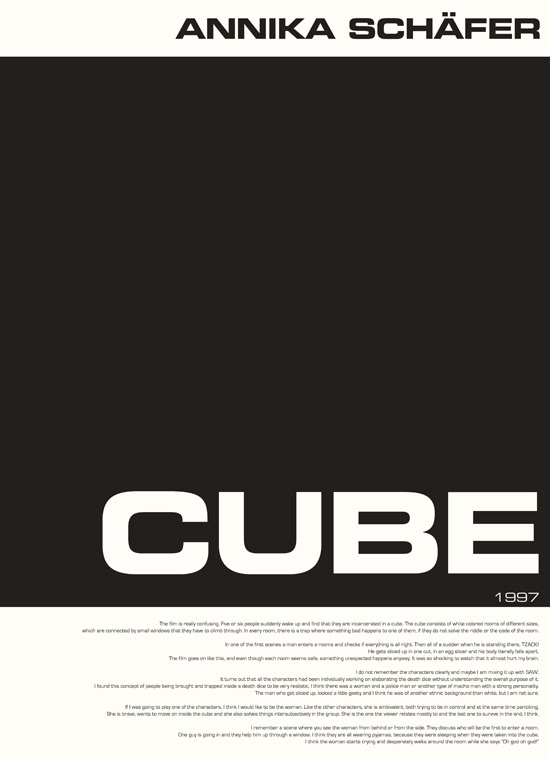 The film is really confusing. Five or six people suddenly wake up and find that they are incarcerated in a cube. The cube consists of white colored rooms of different sizes, which are connected by small windows that they have to climb through. In every room, there is a trap where something bad happens to one of them, if they do not solve the riddle or the code of the room.

In one of the first scenes a man enters a rooms and checks if everything is all right. Then all of a sudden when he is standing there, TZACK! He gets sliced up in one cut, in an egg slicer and his body literally falls apart. The film goes on like this, and even though each room seems safe, something unexpected happens anyway. It was so shocking to watch that it almost hurt my brain.

I do not remember the characters clearly and maybe I am mixing it up with SAW. It turns out that all the characters had been individually working on elaborating the death dice without understanding the overall purpose of it. I found this concept of people being brought and trapped inside a death dice to be very realistic. I think there was a woman and a police man or another type of macho man with a strong personality. The man who got sliced up, looked a little geeky and I think he was of another ethnic background than white, but I am not sure.

If I was going to play one of the characters, I think I would like to be the woman. Like the other characters, she is ambivalent, both trying to be in control and at the same time panicking. She is brave, wants to move on inside the cube and she also solves things intersubjectively in the group. She is the one the viewer relates mostly to and the last one to survive in the end, I think.

I remember a scene where you see the woman from behind or from the side. They discuss who will be the first to enter a room. One guy is going in and they help him up through a window. I think they are all wearing pyjamas, because they were sleeping when they were taken into the cube. I think the woman starts crying and desperately walks around the room while she says Oh god oh god!

Which of the film scenes in your memory seem or seemed the most violent to you?

The one from that movie “The Cube” from 2000. I first watched it in Germany, I found it totally hardcore and I could hardly watch it because it felt so brutal. Later I watched the movie again in America and I thought it was totally bad, ridiculous somehow. In the movie people get locked inside this cube, which is made up of of a lot of smaller cubes, and they have to move or climb from one room to the next, sometimes it’s a trap and then something totally extreme happens. In one scene, for example, someone gets cut in two by a wire, you hear this cutting sound and suddenly he falls apart. I found it so shocking because it was just so unexpected. Afterwards I thought that it was actually a quick way to die. But first of all I found it psychologically very painful.

The character gets cut into cubes, I remember, I think with a laser.

Like with an egg slicer … Initially it’s really gross. But when you’ve seen a couple of movies like this you get used to it.

At the start of the movie you have no idea why these people are locked in the cube, right?

Right. At the end you find out that the prisoners were all working on this project independently of one another, without knowing what they were really creating. That that was the point, that they all designed the cube.

That’s the philosophical, socio-critical aspect of the movie. The structures which kill us are ones we create ourselves.

But they have to help each other as well, solve riddles and stuff.

Do you remember the characters involved, how many were there?

Five or six, I don’t remember any more exactly.

Yes, both. Different types, the macho, the fighter, the thinker, the doubter …

Do you remember the woman?

Do you remember the man who got chopped up into cubes?

Some nerdy guy with an immigrant background, I think.

Was there a victim type among the characters?

Yes, and also a mysterious type who you think is the perpetrator.

Black outside, dark, huge. Inside mostly white, bare. I don’t remember all the traps any more. One person was decapitated …

Interesting that it’s the scene where the person gets cut into cubes that you remember. What did you find more shocking in the movie, the more realistic or more the fictional elements?

More the realistic ones. When I can imagine something similar happening to me too. But the fictional elements also make me imagine things, I used to do that a kid too. Lying in bed looking at a chair piled with clothes, and thinking it’s someone standing in the room. Only briefly, but it can be unsettling.

Do you find the scene in the movie realistic?

No. What I found realistic was more the philosophical background that we talked about. That everyone in capitalism is involved somehow but no one feels responsible. I thought that was good. The brutal component is a question of taste.

Do you think that people generally feel responsibility for their behavior?

No. They blame it on the situation, external pressures.

For example I voted for the Greens, for one thing they were always anti-war. And suddenly they voted for the war in Kosovo. That was down to international pressures. It’s difficult. The same thing goes for Libya and Syria. On the one had you want to help, on the other hand you maybe think, this is not our problem.

If you’re in the army or the police it goes with the job that you might have to shoot someone. No one can say you had nothing to do with it.

The privatization of war or violence in general is a problem because it means that information and the discussion about violence is also controlled. The images from Abu Ghraib were so important because it was only when they became public that something happened and a trial took place.

That’s what’s good about making things public. On the other hand it was also traumatizing for people, without them actually being there. The images of 9/11 for example. They allow you to share the experience in a way. And wars too. I find myself looking for these images on Youtube, the ones that show the full brutality. Then I ask myself if there’s something wrong with me, because I want to see them. This curiosity is interesting. It’s about trying to find out if things are real, if the dead people are real etc. What you see in the news is not enough, I want to look more closely. But what good does it do me, this knowledge and these images in my head?

Back to the scene. The room was completely white, right? Was there a door?

Like a white Apple computer, no doors but small hatches that you had to crawl through. The guy in the scene is standing in one of these room and says: Hey, everything’s okay here. And then: Clunk! And so it continues, you think everything’s okay and then it happens. I like it when this happens in horror movies, not that you always know exactly when something’s about to happen.

Do the characters talk to each other?

Yes, they hardly know each other at the start. They help each other out, they fight too. At the end I think, the only people left are the woman and the guy who seems so tough. Then the man dies too and the woman is the only one who gets to the edge of the cube, although she doesn’t actually get out. That’s the end, I think.

In the room where the man gets cut up, is it empty?

Empty or maybe there’s a gray grate, I don’t remember.

Which of the characters that you can remember would you like to play?

Maybe someone who tries to understand the whole thing and to get out. It’s tricky, they were all a bit ambivalent.

Well, he did try to solve the mystery but then he was also totally panicked. Probably more the woman, she tried her best, she was brave and she also looked for solutions within the group. It’s easy to identify with her as a viewer, also because she survives at the end. The man at the end is not very nice for example, and he does something that kills someone else. He was devious. And the woman survives because the others don’t see her as a threat. She could have been the one.

Many people see all the Anglicisms that have come with new media as a form of organized violence. I’m not so bothered by it, but I can understand that other people find it annoying.

The Germans have become blind to race. Colorblind, you could say. There are no differences between skin colors anymore. If you see a black guy, you try to look at him as if he wasn’t black at all. (Annika means here that the germans do as if it is non-existing)

A form of positive violence perhaps. I read something interesting about that … Here it is. (Reads out loud): Violence of negativity: Degrading, discrediting. Violence of positivity: Over communication, over-information, over-production, that’s what the police do at Kotbusser Tor. They say they are there as prevention. The police don’t see themselves as violent.

Sure, but they have to send out that message. After all there are people in this world who only understand violence.

The question is whether you can see power or not. Something that doesn’t seem violent, but is perhaps violent after all. For example if I permanently say that Kreuzberg is dangerous, that you shouldn’t go there etc. then …

Like the threat of terrorism, which we are told about the whole time. It might be there but it has also led to a lot of changes being made.