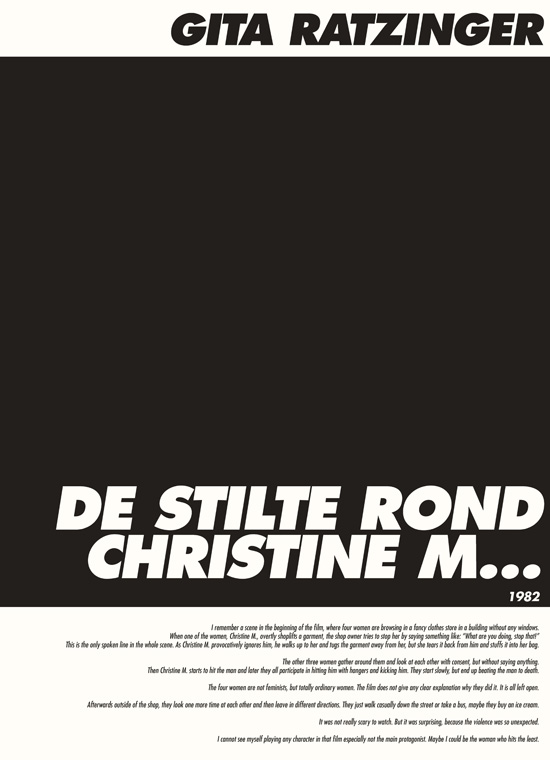 I remember a scene in the beginning of the film, where four women are browsing in a fancy clothes store in a building without any windows. When one of the women, Christine M., overtly shoplifts a garment, the shop owner tries to stop her by saying something like: “What are you doing, stop that!” This is the only spoken line in the whole scene. As Christine M. provocatively ignores him, he walks up to her and tugs the garment away from her, but she tears it back from him and stuffs it into her bag.

The other three women gather around them and look at each other with consent, but without saying anything. Then Christine M. starts to hit the man and later they all participate in hitting him with hangers and kicking him. They start slowly, but end up beating the man to death.

The four women are not feminists, but totally ordinary women. The film does not give any clear explanation why they did it. It is all left open.

Afterwards outside of the shop, they look one more time at each other and then leave in different directions. They just walk casually down the street or take a bus, maybe they buy an ice cream.

It was not really scary to watch. But it was surprising, because the violence was so unexpected.

I cannot see myself playing any character in that film especially not the main protagonist. Maybe I could be the woman who hits the least.

…It’s about helplessness, this woman’s powerlessness. There have been a lot of stories like this in real life, like that woman in Austria, Kampusch she was called. And you get them in “Tatort” in Scandinavian crime series.

The film doesn’t fit in the category of horror movies. It’s more about making the situation of women clearer, it’s a political film.

Produced by a woman.

It’s metaphorical, to show how helpless woman often are, and also in relation to men, in violent relationships. The movie doesn’t belong in the violent movie or horror movie genre.

Some people only make horror movies because they sell well. I have no idea why someone would make a movie like that. And most mainstream movies have no moral background. But this film has a strong moral background. It doesn’t belong in the same category, you should explain that. It’s not about the thrill of women’s defenselessness, as it’s exploited in pornography. I don’t want it to be understood like that.

I like Asian movies that show strong women. In western cinema, it’s typical for the woman to start off strong and get weaker as it goes on. I don’t necessarily mean contemporary movies, but in something like “The Thomas Crown Affair” Faye Dunaway plays a strong woman at the side of Steve McQueen, but in the end she falls in love with him and she can’t do her job properly. I’ve seen this so often, that the woman starts out strong, as the protagonist, and then ends up as the sidekick.

They end up in the status quo.

Exactly. That’s why I find movies like the ones made by Marleen Gorris so important. You notice that they are made by a woman, and that this woman is conscious of what the women do as characters in the movie.

It’s about women defending themselves against violence.

On a certain level there is solidarity between these women, who don’t know one another after all. An understanding, it’s very strong in this scene. And the violence is not brutal somehow, I don’t know why exactly.

I asked you whether you find the scene realistic or abstract, fictional, in other words.

If the women in the film scene knew each other, would it be different?

It certainly comes over that it wasn’t planned, that it was something that just happened in that moment. That does make a difference. The director can convey that, that the situation in the movie is coincidental. But when you think about it, it’s obvious that of course it isn’t coincidental and then you start thinking about it in terms of society as a whole. The scene itself, though, is initially totally coincidental and unrealistic, perhaps that’s why it’s so brutal.

When you saw the movie, did you feel sorry for her? Or is she portrayed more as a criminal?

You neither feel sorry for her, nor do you see her as a criminal.

And the psychologist is she on her side?

Yes, the psychologist sides with her and therefore against her husband and the whole justice system. In the 1980s, when the movie was made, it was completely unheard of for a woman to commit a pointless murder, it went against all expectations. A woman who watches the film today will understand it right way. Although the murder is totally brutal, with the coat hanger. Still, my first association is not that it was brutal, perhaps because it was clear from the start that it was metaphorical.

That’s exactly the difference to other movies which are only out for the effects and which don’t use violence in a metaphorical way.

Her first movie is also not really about physical violence, it’s more about structural violence.

Who would you chose to play?

Someone who’s more in the background. I have no idea whether there are any people who are just eye witnesses. I think all of them are involved in the scene somehow.

She’s the main person, she attacks first. I think something happened before that … He warns her or tries to take it away from her, but she refuses and keeps stuffing the things into her bag and only then do they look at each other and then she attacks him. All three women surround the man, that’s how it starts, then comes the moment when it gets physical and they start laying into him.