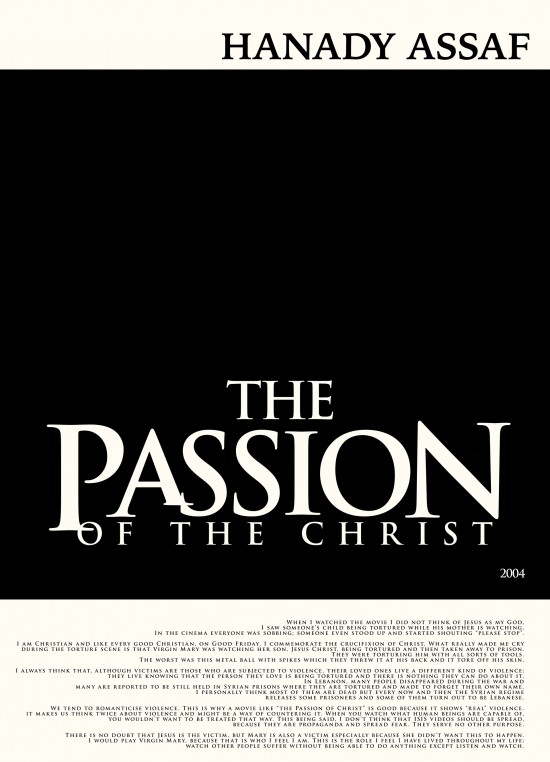 The Passion of Christ

When I watched the movie I did not think of Jesus as my God. I saw someone’s child being tortured while his mother is watching. In the cinema everyone was sobbing: someone even stood up and started shouting “please stop”.

I am Christian and like every good Christian, on good Friday, I commemorate the crucifixion of Christ. What really made me cry during the torture scene is that Virgin Mary was watching her son. Jesus Christ, being tortured and then taken to prison. They were torturing him with all sorts of tools. The worst was this metal ball with spikes which they threw it at his back and it tore off his skin.

I always think that although victims are those who are subjected to violence, their loved ones live a different kind of violence; they live knowing that the person they love is being tortured and there is nothing they can do about it.

In Lebanon, many people disappeared during the war and many are reported to be still held in Syrian prisons where they are tortured and made to forget their own name. I personally think most of them are dead but every now and then the Syrian regime releases some prisoners and some of them turn out to be Lebaneese.

We tend to romantize violence. This is why a movie like “The Passion of Christ” is good because it shows “real” violence. It makes us think twice about violence and might be a way of countering it. When you watch what human beings are capable of you wouldn’t want to be treated that way. This being said, I don’t think that ISIS videos should be spread, because they are propaganda and spread fear. They serve no other purpose.

There is no doubt that Jesus is the victim, but Mary is also a victim especially because she didn’t want this to happen. I would play Virgin Mary, because that is who I feel I am. This is the role I feel I have lived throughout my life: watch other people suffer without being able to do anything except listen and watch.